Via Andrew Sullivan, Kevin Carey uses a parable to explain why college tuition costs have risen so steeply over the past few decades:

Then the government decides that more people should have the opportunity to buy apples and society would benefit from a net increase in apple consumption. So it decides to drop the price of apples to 60 cents. 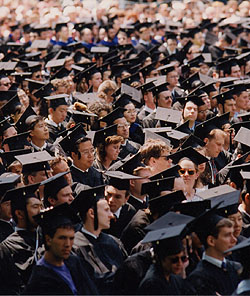 Sometimes it does this by giving you 40 cents for every apple you sell, on the condition that you start selling apples for 60 cents. Sometimes it gives people vouchers worth 40 cents that can only be used to purchase apples from approved vendors.

At first, the policy works splendidly. Apples are effectively less expensive so more people buy them and the nation is suffused with apple goodness. But then you, the apple vendor, look at the situation and say “Hey, the market price of an apple is still $1. Wouldn’t it be great if I could charge $1 for apples, but still get 40 cents from the government for every apple I sell?” Raising the price all the way from 60 cents back to $1 in a single year would be too obvious and jeopardize political support for the apple subsidy program. So you start raising prices by three, four, or five percent above inflation annually.

…But eventually things start to break down. As time passes and price increases accumulate, the public starts to notice that while the taxes they pay to support apple subsidies are staying the same, the price of subsidized apples is creeping closer to the market price. This seems unreasonable.

Actually, I think the situation is much worse than this, and student aid programs are probably only a small part of the story. The real problem is indeed related to the market price of higher education, but it’s not just that universities are steadily making up for distortions caused by federal aid. The fact is that we’ve never been in a situation where universities were charging a market price in the first place. After all, if the lifetime wage premium for a college grad is a million dollars over 40 years, then how much is four years of college worth today? Answer: about $300,000 or so. That’s $75,000 per year.

Now, there’s some controversy about whether the college wage premium is really that high. For the time being, though, there’s certainly a widespread belief that a college degree is worth about a million bucks. And as long as that belief persists, people are going to act as if the market price of a university education averages $75,000 per year. (Higher for elite colleges, of course, and lower for ordinary state universities.) And that’s going to put steady upward pressure on tuition costs.

For many decades, universities acted as though they had a public, charitable mission. That was especially true for state universities, but it was true for most private universities too. That’s largely changed. In the public sphere, taxpayers have noticed that (a) it’s mostly well-off kids who go to college these days, not children of the poor bettering themselves, and (b) this education is worth a helluva lot of money. So why should they be asked to subsidize a route to higher earnings for kids who, for the most part, already have a lot of advantages? The cost of college loans seems more and more like a simple financial transaction to them, not a crushing burden being placed on struggling youngsters.

In the private sector, I’d guess that universities are simply coming to grips with the fact that they can charge a lot more than they ever imagined. They’re testing the boundaries of their market price, and they haven’t found it yet. Until they do, tuition costs will continue to skyrocket.

Carey has a proposal to address this problem that strikes me as iffy, but it’s worth taking a look at. It revolves around the idea of fundamentally transforming higher education away from standard lecture halls and instead taking advantage of technology to improve the productivity of teaching. I have some doubts about whether this will work, but it’s not something I’d dismiss entirely. What’s more, it requires heavy regulation (which Carey endorses) or else the benefits of higher productivity will mostly just flow to the producers of education anyway, not the consumers.

So the answer remains elusive. But given that universities are most likely still charging a lot less than their market price even after years of stiff tuition increases, my guess is that we’re in for yet more pain one way or another.