So then: Ron Paul. Should we lefties be happy he’s in the presidential race, giving noninterventionism a voice, even if he has other beliefs we find less agreeable? Should we be happy that his nonmainstream positions are finally getting a public hearing? This is a depressingly common view. For example:

Can we talk? Ron Paul is not a charming oddball with a few peculiar notions. He’s not merely “out of the mainstream.” Ron Paul is a full-bore crank. In fact he’s practically the dictionary definition of a crank: a person who has a single obsessive, all-encompassing idea for how the world should work and is utterly blinded to the value of any competing ideas or competing interests.

This obsessive idea has, at various times in his career, led him to: denounce the Civil Rights Act because it infringed the free-market right of a monolithic white establishment to immiserate blacks; dabble in gold buggery and advocate the elimination of the Federal Reserve, apparently because the global economy worked so well back in the era before central banks; suggest that the border fence is being built to keep Americans from leaving the country; claim that Social Security and Medicare are unconstitutional and should be dismantled; mount repeated warnings that hyperinflation is right around the corner; insist that global warming is a gigantic hoax; hint that maybe the CIA helped to coordinate the 9/11 attacks; oppose government-sponsored flu shots; and allege that the UN wants to confiscate our guns.

This isn’t the biography of a person with one or two unusual hobbyhorses. It’s not something you can pretend doesn’t matter. This is Grade A crankery, and all by itself it’s reason enough to want nothing to do with Ron Paul. But of course, that’s not all. As we’ve all known for the past four years, you can layer on top of this Paul’s now infamous newsletters, in which he condoned a political strategy consciously designed to appeal to the worst strains of American homophobia, racial 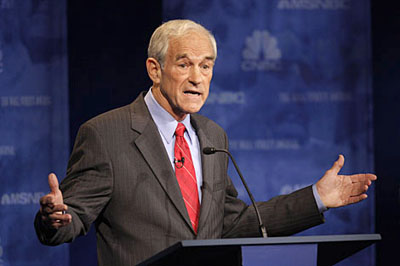 paranoia, militia hucksterism, and new-world-order fear-mongering. And on top of that, you can layer on the fact that Paul is plainly lying about these newsletters and his role in them.

Now, balanced against that you have the fact that Paul opposes the War on Drugs and supports a non-interventionist foreign policy. But guess what? Even there, he’s a crank. Even if you’re a hard-core non-interventionist yourself, you probably think World War II was a war worth fighting. But not Ron Paul. He thinks we should have just minded our own damn business. And even if you’re a hardcore opponent of our current drug policy—if you think not just that marijuana should be legalized, not just that hard drugs should be decriminalized, but that all illicit drugs should be fully legalized—I’ll bet you still think that maybe we should retain some regulations on a few of the worst drugs. They’re pretty dangerous, after all, and no matter how much you hate the War on Drugs you might have a few qualms about a global marketing behemoth like RJ Reynolds having free rein to advertise and sell anything it wants, anywhere it wants, in any way it wants. But not Ron Paul. As near as I can tell, he just wants everything legalized, full stop.

Bottom line: Ron Paul is not merely a “flawed messenger” for these views. He’s an absolutely toxic, far-right, crackpot messenger for these views. This is, granted, not Mussolini-made-the-trains-run-on-time levels of toxic, but still: If you truly support civil liberties at home and noninterventionism abroad, you should run, not walk, as fast as you can to keep your distance from Ron Paul. He’s not the first or only person opposed to preemptive wars, after all, and his occasional denouncements of interventionism are hardly making this a hot topic of conversation among the masses. In fact, to the extent that his foreign policy views aren’t simply being ignored, I’d guess that the only thing he’s accomplishing is to make noninterventionism even more of a fringe view in American politics than it already is. Crackpots don’t make good messengers.

Now, if you literally think that Ron Paul’s views on drugs and national security are so important that they outweigh all of this—multiple decades of unmitigated crackpottery, cynical fear-mongering, and attitudes toward social welfare so retrograde they make Rick Perry look progressive—and if you’ve somehow convinced yourself that noninterventionism has no other significant voices except Ron Paul—well, if that’s the case, then maybe you should be happy to count Paul as an ally. But the truth is that you don’t need to. Ron Paul is not a major candidate for president. He’s never even been a significant presence as a congressman. In a couple of months he’ll disappear back into the obscurity he so richly deserves. So why get in bed with him? All you’ll do is wake up in March with a mountain of fleas. Find other allies. Make your arguments without bothering to mention him. And remember: Ron Paul has never once done any of his causes any good. There’s a good reason for that.