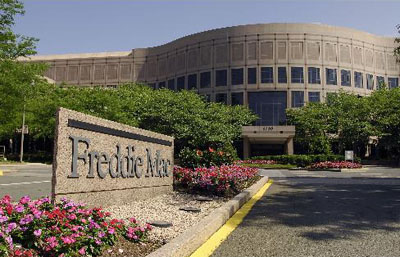 Freddie Mac, the taxpayer-owned mortgage giant, has placed multibillion-dollar bets that pay off if homeowners stay trapped in expensive mortgages with interest rates well above current rates. Freddie began increasing these bets dramatically in late 2010, the same time that the company was making it harder for homeowners to get out of such high-interest mortgages.

No evidence has emerged that these decisions were coordinated. The company is a key gatekeeper for home loans but says its traders are “walled off” from the officials who have restricted homeowners from taking advantage of historically low interest rates by imposing higher fees and new rules.

Ah, the old Chinese wall. I remember it well from the dotcom bubble days, when investment banks supposedly erected an impenetrable barrier between the bankers who helped Pets.com go public and the analysts who told clients whether Pets.com was a good investment. After it all blew up, of course, it turned out the wall wasn’t quite as impenetrable as everyone thought.

So how is Freddie doing this? After telling us the story of the Silversteins, who want to get a refi on their current high-interest loan but can’t because of Freddie Mac policies, the authors explain:

Here’s how Freddie Mac’s trades profit from the Silversteins staying in “financial jail.” The couple’s mortgage is sitting in a big pile of other mortgages, most of which are also guaranteed by Freddie and have high interest rates. Those mortgages underpin securities that get divided into two basic categories.

One portion is backed mainly by principal, pays a low return, and was sold to investors who wanted a safe place to park their money. The other part, the inverse floater, is backed mainly by the interest payments on the mortgages, such as the high rate that the Silversteins pay. So this portion of the security can pay a much higher return, and this is what Freddie retained.

In 2010 and ’11, Freddie purchased $3.4 billion worth of inverse floater portions — their value based mostly on interest payments on $19.5 billion in mortgage-backed securities, according to prospectuses for the deals. They covered tens of thousands of homeowners. Most of the mortgages backing these transactions have high rates of about 6.5 percent to 7 percent, according to the deal documents.

So as long as homeowners have to keep paying high interest rates on their loans, Freddie’s investment is gold. If they refi into a lower-interest loan, the value of the inverse floater goes down and Freddie is in trouble. Naturally, it’s all just a big coincidence that Freddie is simultaneously making it hard for families to refi into lower-interest loans. Chinese wall, you know.

Read the whole thing for more. It’s good to see that the American finance industry hasn’t lost a step just because of that whole financial collapse thing a couple of years ago.