Steve Benen sends me to Benjy Sarlin and Kyle Leighton, who write:

Mitt Romney may be on the verge of securing the nomination, but his campaign is still struggling with a pretty basic problem as it looks towards the general 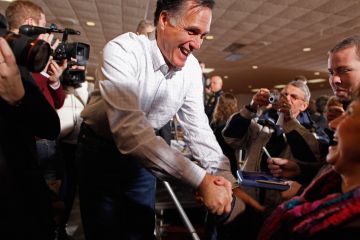 I admit that what I’m about to write sounds like a snarky #slatepitch (“America is Falling in Love With Mitt Romney!”), but is it really true that people don’t like Romney? Well, I don’t like him much. Most of my readers don’t like him much. The press corps probably doesn’t like him much. But the truth is that the only reason Romney has this label pinned on him is because the media anointed him a front runner and is now feigning surprise that he hasn’t sewn up the nomination sooner than any candidate in history. But that doesn’t mean Romney is unlikeable. It just means he’s fairly normal.

As further evidence, Sarlin and Leighton cite a new PPP poll showing that Romney’s unfavorables are high. But let’s take a look at everyone, not just Romney. Here are the unfavorables for all five candidates still in the race as of early this week:

Not bad! Especially for a candidate that everyone knows is starting in a hole because a certain segment of the evangelical community is just never going to approve of a Mormon for president. The fact is, these are just not the numbers of a guy that no one can stand. Rather, they’re the numbers of a candidate in a tough race, where negative ads have forced everyone’s unfavorables pretty high.

Sarlin and Leighton acknowledge this later in their piece. But the headline and the lead are all about the fact that people just don’t like Romney. Watch out, though. The DC media invented an identical narrative for Al Gore in 2000, and it was more a self-fulfilling prophecy from a bunch of reporters who disliked Gore than it was a reflection of the actual truth.

Look: I’m not going to vote for Romney. His willingness to abase himself to the tea party wing of the GOP is nauseating, his obvious fealty to corporate interests is offensive, and — well, you know, he’s a conservative. Of course I’m not going to vote for him. But that doesn’t mean he’s unusually unlikeable. Frankly, of the five guys listed above, I’d probably prefer him as a next-door neighbor to any of them.