At this point, it’s not clear to me how useful it is to keep re-litigating the role Larry Summers played in deciding how big the 2009 stimulus package should be. Lots of different participants have given their views, and there’s simply a limit to how much we’re ever going to know.

Still, a contemporaneous memo is different. If we had a copy of the written advice Summers gave to President-elect Obama in December 2008, that would tell us a lot, wouldn’t it? Well, now we do, thanks to Ryan Lizza. And guess what? I’m still not sure it will help produce any consensus on Summers’ role. Paul Krugman, for example, comes away from it with this:

The key thing I took away from the memo is that it does not read at all like the current story the administration gives for the inadequate size of the stimulus, which is that they knew it should be larger but had to face political reality. Instead, the memo argues that a bigger stimulus would be counterproductive in economic terms, because of the “market reaction.” That is, Summers et al were afraid of the invisible bond 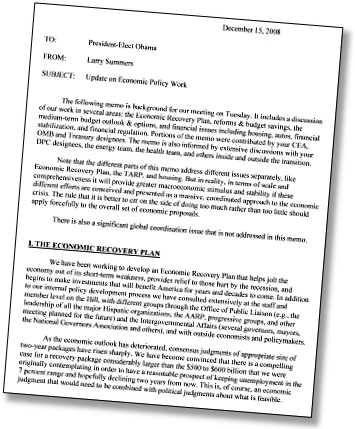 vigilantes. And to the extent that there is a political judgment, it’s all in the opposite direction: if the stimulus is too big, we’ll have trouble scaling it back, but if it’s too small, we can always go back to Congress for more. That was deeply naive—and I said so in real time.

But that’s not at all what I came away with after reading the memo. It’s true that political reality (i.e. Congress) gets only a few brief mentions, but at the same time Summers is pretty clearly not worried about bond vigilantes and doesn’t believe that going back to Congress for more money would be easy. Quite the opposite. After spelling out the case for a big stimulus, Summers lists some “considerations on the other side,” as any honest advisor would. However, he specifically argues that those other considerations are wrong. The bond market isn’t likely to react badly, he says, and “we do not believe this should deter escalation well above $600 billion.” And while some may believe that we can always do more later if we need to, Summers argues instead that “this is a key moment to get ahead of the curve in responding to economic distress.”

Now, it’s clear from the memo that Summers and others underestimated the depth of the coming recession, though perhaps not by as much as everyone thinks. In fact, he’s clear that an $850 billion stimulus would close only half the output gap, and then makes his primary argument for not trying to close the whole thing:

But it is important to recognize that we can only generate about $225 billion of actual spending on priority investments over next two years…This total, however, falls well short of what economists believe is needed for the economy, both in total and especially in 2009. As a result, to achieve our macroeconomic objectives—minimally the 2.5 million job goal—will require other sources of stimulus including state fiscal relief, tax cuts for individuals or tax cuts for businesses. All three of these areas, however, raise tradeoffs because they are not as economically effective as stimulus, do not represent a down payment on a campaign promise (with the exception of the Making Work Pay credit), and do not have a lasting impact on the economy beyond protecting against a deep recession.

Emphasis in the original. Summers believed that it was only possible to come up with $225 billion in direct spending that had a high stimulus value. Further money could be targeted at tax cuts and aid to states, but it had a lower stimulus value. So there was a sense of diminishing returns here.

Now, that might have been wrong, but it’s a fairly defensible position. And it has nothing to do with bond vigilantes or bad political judgments. So even with a contemporaneous memo available to read, the Rashomon effect is still strong. All of us read the same words and we all come away with different interpretations.