A couple of days ago I argued that, if anything, Ron Paul is such a profoundly toxic messenger that his support for a non-interventionist foreign policy probably does the cause more harm than good. Daniel Larison isn’t convinced:

The amusing conceit in all of this is that Paul has been or will be bad for non-interventionism. Far fewer people paid any attention to these ideas just five years ago. Non-interventionism has gone from being a more or less marginal position to one that is starting to receive a lot more 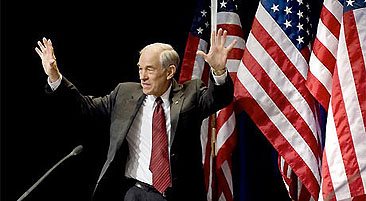 attention and at least a little serious consideration. It’s impossible to ignore that this wouldn’t have happened had it not been for Paul’s last two presidential campaigns.

Look: I’ll concede up front that it’s not possible to know for sure what impact Ron Paul is having on public views toward non-interventionism. But come on. It’s true that the American public is less enamored of war these days than it used to be, but the obvious reason for this can be summed up in two words: Afghanistan and Iraq. Americans are more skeptical of military adventurism than they were ten years ago because the shock of 9/11 has worn off and we’ve gone through two spectacularly disastrous foreign wars. Ron Paul has played almost no role in this at all. Hell, even Iraq and Afghanistan themselves probably haven’t had much effect. We won’t know for sure about this until some kind of serious military action rears its head again, but here’s a guess: if Iran makes even the slightest overt military move to block the Strait of Hormuz, the American public will be every bit as keen for blood as they’ve ever been.1 And frankly, that’s probably about as true among Ron Paul’s supporters as everyone else. They’ve always cared mostly about his economic crankery and his opposition to social welfare, not his foreign policy views.

If you’re a libertarian, I understand that you won’t agree about Ron Paul’s general toxicity. That’s why my post on Monday was addressed primarily to lefties. For us, even before we learned about his newletters, it should have been crystal clear that he was no cuddly little teddy bear. He’s a destructive, insanely-far-right crank, and anything we do to give him a bigger audience is bad for liberalism and bad for the country. After all, let’s say that you were, for unimpeachably progressive reasons, really and truly devoted to the cause of federalism. Would you be happy that George Wallace was running for president? Of course not. Because you get the whole package or nothing, and anything that makes George Wallace more popular is bad for the country. Ditto for Ron Paul.

If you want to advance the cause of a less interventionist foreign policy, you need to find a way to persuade the American public to agree with you. Ron Paul doesn’t do that. He’s never done that. He’s such a stone libertarian that he literally doesn’t know the language to do it. Because of this, giving him a bigger spotlight does little for the cause of a saner foreign policy. At the same time, it does plenty for less sanity everywhere else because you don’t get to control where the spotlight falls. Politics may make for strange bedfellows, but there are limits. There are some allies that aren’t worth having.

1I should add that I’m not trying to pretend to be something I’m not here. I’m in favor of a less interventionist foreign policy, a view that has plenty of voices these days not named Ron Paul, but I’m not a hardcore non-interventionist like Paul. If Iran seriously tried to mine the Strait of Hormuz, for example, I’d fully expect the U.S. Navy to put a stop to it, even if that meant sinking a few Iranian vessels.