It’s sort of fascinating watching the Republican establishment finally go nuclear on Newt Gingrich. As near as I can tell, pretty much everyone who actually served with or alongside Newt in the 90s hates his guts. But as long as he was just writing books and doing think tanky stuff, they were willing to let bygones be bygones. Ditto for the period when he was supposedly running for president but, in reality, was just conducting an innovative new kind of book tour.

But now that he has millions of dollars of Sheldon Adelson’s casino money and has even an outside chance of actually winning, the long knives are out. Bob Dole has a scorching attack here. The Drudge Report is now the We-Hate-Newt Report. Philip 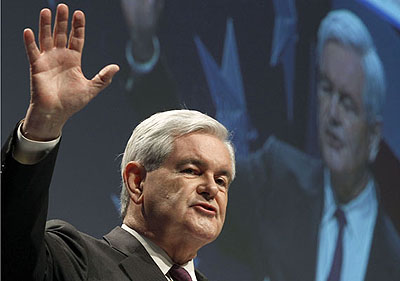 Klein launches a brutal broadside here. Suddenly everyone remembers the 90s again, and in particular how volcanically unstable Newt was.

All good fun. What’s most ironically amusing about all this, though, is that underlying a lot of the attacks on Newt is the complaint that he’s not conservative enough. Weirdly enough, there’s some truth to this by modern GOP standards. Newt’s tone and temperament are perfectly suited to the no-compromise-no-surrender spirit of the tea party-ized GOP, which is why he’s so appealing to the base during debates. But the truth is that for all his bluster, Newt was perfectly willing to do deals during his time as Speaker. He likes to think of himself as a world-historical figure, and that means getting world-historical things done. Simple obstruction is not really his MO. That makes him doubly unreliable, since obstruction is the sine qua non of movement conservatism these days.

Conservatives think that listening to Newt is a hoot, and they love it when he gets the crowds wound up. The problem is that they never quite realized the crowd wasn’t in on the con. The rank-and-file actually took Newt seriously, and now party leaders have to figure out how to suck the fetid air back out of the Gingrich-inspired fever swamps without losing their core audience of old people and the white working class, who are voting for their side because they’re scared to death that Barack Obama is destroying western civilization. In the end, I don’t think they’ll have much trouble pulling this off, but in the meantime it makes the whole spectacle even better fun for us jeering liberals.