Felix Salmon is puzzled. So am I. Here is Ken Doctor reporting on the success of the New York Times paywall, which was put in place last year and has since attracted 390,000 subscribers:

It took about 12 seconds for Times’ readers to figure out the new subscription math, when the company when digital-paid last year. When they did the math and saw they could get the four-pound Sunday paper and “all-digital-access” for $60 less than “all-digital-access” by itself, they took the newsprint. Which 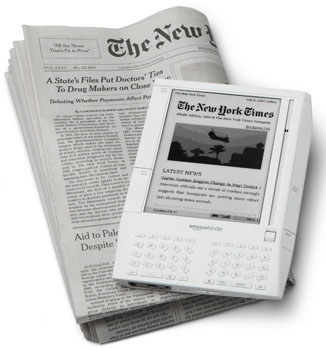 stabilized Sunday sales, and the Sunday ad base. Then the Times was able to announce a near-historic fact in October: Sunday home delivery subscriptions had actually increased year-over-year, a positive point in an industry used to parsing negatives. Now, Sunday is emerging a key point of strategic planning.

And here is Felix:

This is great news for the Sunday newspaper, which is highly profitable for the NYT. But it also raises the obvious question: why are 390,000 NYT readers eschewing a Sunday paper they could get for less than nothing? Some are IHT subscribers who don’t have that option; others are naturally peripatetic. And the cheapest digital subscription is actually still cheaper than the Sunday-only delivery.

Huh? Feeling a bit outraged when I read this, I went over to the NYT site to see how much I was paying for my digital-only subscription. The Times doesn’t make it especially easy to figure this out, but according to my billing history the answer turns out to be $11.25 every four weeks, or $146 per year. This gets me the Times-online plus their smartphone app. (But not the tablet app, since I don’t own a tablet.)

And what’s the cost of Sunday home delivery? Well, that’s not easy to figure out either. In fact, it’s so hard to figure out that I think the Times is about a hair’s breadth away from fraudulent advertising. However, in my zip code the answer is $3.90 per week, or $203 per year. So that’s quite a bit more than digital-only. What’s more, this is an introductory rate, and although it’s close to impossible to find out what the rate is once the introductory period is over, after heroic effort I discovered that it would cost me $7.80 per week, or $405 per year. That’s way, way more than my digital subscription.

Now, I’m not sure what kind of deal the Times was offering last year when the paywall was first launched, but I also tried this after typing in a New York City zip code, which offered me only a Saturday-Sunday option, not a Sunday-only option. It’s a little less expensive than getting the paper out here in Irvine, but it still comes to $343 per year.

Now, having said all that, I still don’t know what’s going on. According to the NYT website, a digital+smartphone subscription costs $3.75 per week. So why am I getting it for $2.81 per week? It is a mystery.

Bottom line: New York Times pricing is mysterious. However, Felix’s passing mention that “the cheapest digital subscription is actually still cheaper than the Sunday-only delivery” explains everything. Basically, the “cheapest” digital subscription gets you everything except their tablet app. So unless you want that — and I imagine lots of people don’t — digital pricing is considerably cheaper than home delivery no matter how you slice it. So the one thing there’s no mystery about is why there are 390,000 digital-only subscribers. It’s because that’s the cheapest way to get unlimited access to the Times.