Did the Supreme Court decision in Citizens United produce the recent explosion of Super PACs and their flood of independent money from rich donors into the 2012 campaign? There’s been a bit of a cottage industry lately claiming that this is a myth, followed by a bit of a counter-cottage industry insisting that it’s true after all. In a nutshell, the mythbusters claim (correctly) that Citizens United affected only the ability of corporations and unions to make independent campaign expenditures, but most of the money flowing into Super PACs has comes from private individuals, who have been able to spend unlimited sums for years. The counterclaim is that Citizens United really did unleash expenditures from individuals, but did it indirectly. Legally, the chain goes from Citizens United to SpeechNow, which was the case that removed all previous limitations on private expenditures. Andrew Sprung has a pretty good summary of the arguments here.

So which is it? In the end, I think the argument is inherently a little metaphysical. Remember 527s? Prior to Citizens United, rich people who wanted to spend lots of money on campaign ads either did it themselves or contributed to 527 groups. That’s how the Swift Boat folks were organized, for example. But here’s the thing: legally, 527s were allowed to raise money for “issue advocacy,” but not to explicitly advocate for or against a federal candidate. This was, needless to say, a crock: 527s routinely 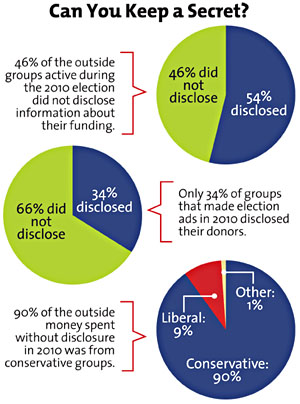 So what impact have Super PACs had? On the one hand, you can argue that they really haven’t changed anything on the ground. They run pretty much the same kinds of attack ads as the 527s used to, and the only change is that they don’t have to worry about legal challenges anymore. On the other hand, you can argue that the added freedom is genuinely important. Being able to explicitly raise money for candidates, instead of pretending to be an issue advocacy group, makes a real difference.

So which is it? Obviously there’s a bit of truth to both sides, and which argument you give the most weight to is mainly a matter of temperament and attitude. For myself, I think it’s fair to say that Citizens United really did have an impact on individual expenditures, but probably didn’t empower rich people quite as much as popular legend has it.

That said, there are also a couple of other points to make. First, Citizens United obviously did unleash spending by corporations and unions. In the 2010 election it seemed as though the impact of Citizens United on corporate spending had turned out to be a bit of a dud, but this year it looks as though it’s finally taking off. Second, one of the commonest complaints about Super PACs is that they’re allowed to hide the sources of their contributions. But this has nothing to do with Citizens United. It has to do with the legal requirements of 501(c)(4) groups, which have become major funding sources for Super PACs. The FEC has declined to force 501(c)(4)s to disclose their donors, and the IRS has declined to enforce the law that says they can’t have electoral politics as their primary purpose. Both of these problems could be fixed tomorrow by legislative means if Congress wanted to. Rick Hasen has a pretty good summary of the current state of play here.

UPDATE: Fred Wertheimer of Democracy21 emails to point out that, in fact, Swift Boat Veterans for Truth was fined $300,000 by the FEC for violating campaign rules. Likewise, America Coming Together, which got substantial funding from George Soros, was fined $775,000.

These are fairly modest sums compared to the amounts raised (nearly $7 million for the Swift Boat group and $137 million for ACT). So again, you’ll have to decide for yourself if these fines mean (a) 527 groups really did operate under meaningful legal constraints or (b) they were a joke and had no real impact.

Regardless, I had forgotten about these fines, and they do suggest that there was at least a little bit more oversight on the old 527 groups than I originally suggested.