Charles Duhigg has a fascinating story in the New York Times Magazine this week that’s all about the way retailers use data mining and microtargeting to sell you more stuff. Among other things, he tells the story of how Target exploited a pile of clever statistical relations to predict when women were pregnant so that they could send out coupon books full of items that pregnant women might want to buy. As it turns out, Target was unamused by Duhigg’s curiosity about how this all worked. When he asked Target to comment, they refused. When he offered to fly out to company headquarters, they told him not to come. When he did anyway, a security guard escorted him off the premises. Quite plainly, Target was concerned that their customers would freak out if they discovered just how much Target knows about them and how accurately Target can aim its marketing bazookas in their direction.

And it turns out Target was right: pregnant women did freak out. So they fine-tuned their coupon books to contain a bunch of random stuff (lawnmowers, videogames) among all the pregnancy-related items. Women who got those coupon books just figured this was the stuff on sale at Target this week and had no 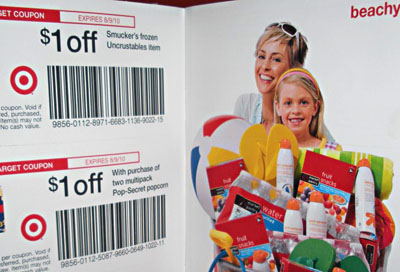 idea that it was more than a coincidence that half the offers were for diapers and onesies.

Longtime readers will be unsurprised to learn that I’m not thrilled by this kind of thing. But Felix Salmon challenges people like me to explain why:

Nowadays, computers have made it increasingly possible to fine-tune personalization down to the individual level, where it can sometimes get “spooky”….If sophisticated corporations manage to make their marketing materials less spooky, I don’t think there’s going to be much popular opposition to continued targeting — at least not in this country. Germany is different: Germans care a lot about their privacy, and fight hard for it.

Here, however, I’ve never received a good answer to the “why should I care?” question.

I’ll admit up front that my reaction to this is mostly emotional: I just don’t like the idea of Target or anyone else knowing so much about me. But the truth is that Felix is right. I don’t really fear Target. The worst thing they can do with all their data mining wizardry is send me personalized coupon books. If I don’t like it, I can toss them in the trash.

(As it happens, I actually think the increasing power of modern marketing in the hands of giant corporations is something we should all take a little more seriously than we do. But that’s a topic for another day. For now, let’s assume that Target’s use of my personal data is pretty benign.)

So then: what’s a good reason to be uneasy about this? Well, if Target can use statistical relations to predict pregnancy, I’ll bet they can predict other things too. For example, the early stages of Alzheimer’s. And much of the data that Target and other retailers collect is also available to other marketers at a price.

Sadly, not all of them have the scruples that Target does. If you were, say, a semi-shady company hawking dubious life insurance schemes, who would be your best prospect? Answer: someone still in enough control of their faculties that they live on their own without lots of supervision from their children or other caregivers, but just infirm enough that their judgment isn’t so good anymore. They’d be perfectly suited to be scared/bullied into buying a bunch of crap they don’t need. Hooray for data mining!

Alternately, keep in mind that it’s not just corporations that can get their hands on this stuff. The federal government can buy it too for whatever profiling schemes the whiz kids at NSA come up with. I’m not super excited by this prospect either.

Now, it’s true that scammers have preyed on the elderly for a long time, and governments have collected information about their citizenry for a long time too. But a problem that’s small and controllable when the targeting data is both diffuse and arduous to collect can become cancerous when the data is cheaply and broadly available. Roughly speaking, then, that’s my answer to the question of why I care. It’s not Target per se. It’s not my local supermarket. It’s the fact that everyone is doing this, the data is all getting collected in centralized databases, and this stuff is then accessible to just about anyone, not just folks who want to send me coupons.

I suspect there’s not much we can do about this. And maybe the good outweighs the bad in any case. After all, the internet is still a good thing even if pedophiles occasionally use chatrooms to stalk their prey. Still, I think there are legitimate reasons for concern. Life is more than just coupons.