Has there been any public controversy in recent memory as disheartening as the Trayvon Martin case? I don’t mean the killing of Martin itself, though. That’s certainly disheartening, but it’s hardly unique. I’m talking instead about the political reaction to it.

A week ago, the worst I could say about right-wing reaction to the Martin case was that conservatives were studiously ignoring it. But that was a week ago. Since then, conservatives have entered the arena with a vengeance. 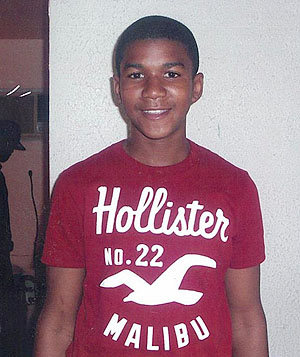 should barely even pretend to investigate the circumstances of a shooting. There’s no special conservative principle at stake that says young black men shouldn’t wear hoodies.

But as Dave Weigel points out today, the conservative media is now defending the shooter, George Zimmerman, with an almost messianic zeal. There’s a fake photo of Trayvon Martin making the rounds, and even after it was debunked it’s still making the rounds:

Why is the fake photo so popular? It’s part of a new cottage industry of “truth about Trayvon” content, calibrated to convince people that they really shouldn’t worry about the implications of this killing. Why, the kid wasn’t even a saint! He might have been shot after brawling with the man who creeply followed him around the gated community? The Drudge Report has become a one-stop shop for Trayvon contrarianism.

Unfortunately, it’s not really a cottage industry at this point. More like a mammoth, smoke-belching factory. When I opened my LA Times this morning, for example, I found Jonah Goldberg staring back at me, explaining that we shouldn’t really care about Trayvon Martin because:

Martin’s tragic death is a statistical outlier. More whites are killed by blacks than blacks killed by whites (or “white Hispanics”). And far, far more blacks are killed by other blacks. Indeed, if we’re going to use the prism of race to analyze murder rates, then the real epidemic is that of black murderers.

Quite so. And that, it turns out, is the conservative principle that’s actually at stake here: convincing us all that traditional racism no longer really exists (just in “pockets,” says Goldberg) and that it’s whites who are the real racial victims in today’s America. Heh indeedy.