July and August of 2010 were a festival of xenophobia and racial rage from the news organs of the right. Among the topics that generated wall-to-wall coverage on a serial basis that summer were (1) the New Black Panthers, (2) Arizona’s new immigration law, (3) the “anchor baby” controversy, (4) the “Ground Zero” mosque, (5) the Shirley Sherrod affair, (6) a new upwelling of birther conspiracy theories, (7) Glenn Beck’s obsession with Barack Obama’s supposed sympathy with “liberation theology,” and (8) Dinesh D’Souza’s contention — eagerly echoed by Newt Gingrich — that Barack Obama can only be understood as an angry, Kenyan, anti-colonialist. Plus I’m probably forgetting a few.

But last summer was pretty quiet. Maybe the right had finally learned its lesson? As it turns out, no. Apparently it’s just that 2011 wasn’t an election year, so there was no point in pushing racial hot buttons all summer long. But 2012 is very much an election year and things are heating up early this time around. I’m speaking, of course, of the latest race-baiting pseudo-exposé on the right: the long-promised video demonstrating just how radical Barack Obama was back in his Harvard Law School days — and probably still is, though of course he’s cannily learned to hide his radicalism from the sheeple now that he’s president of the United States.

Long story short, the late Andrew Breitbart’s site has gotten hold of a video of Barack Obama in 1991 speaking in support of Derrick Bell, a firebrand black law professor at Harvard who, at the time, was demanding that Harvard hire some women of color. Shocking! This video, however, was nothing new. It had been shown on PBS in 2008. Obama’s speech had been mentioned in books. BuzzFeed put up the video on their site before the Breitbart folks did. And the Derrick A. Bell who visited the White House 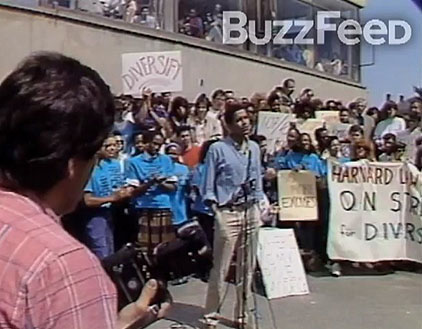 last year turned out to be some other guy named Derrick A. Bell, not the famous law professor. The whole thing is a nothingburger. Paul Waldman comments:

From the beginning of Breitbart’s enterprise, race-baiting was a key element of his attack on Barack Obama, one that continues even after his death. And he always had plenty of company, from Glenn Beck saying Obama “has a deep-seated hatred of white people,” to Rush Limbaugh’s repeated insistence to his white listeners that Obama was motivated by racial hatred in everything he did. “Obama’s entire economic program is reparations,” Limbaugh proclaimed. “The days of [minorities] not having any power are over, and they are angry,” he said. “And they want to use their power as a means of retribution. That’s what Obama’s about, gang.” When in 2009 he found a story about a white kid getting beaten up by a black kid on a school bus, Limbaugh said, “In Obama’s America, the white kids now get beat up with the black kids cheering, ‘Yay, right on, right on, right on, right on.'” And yes, he did that last part in an exaggerated “black” accent.

Paul optimistically suggests that the sheer lameness of the Derrick Bell episode demonstrates that the race-baiting precincts of the right have a problem: “they’re running out of material.” I’d sure like to believe that. But in early 2010, would you ever have guessed that the New Black Panthers would be feted with a multi-week run on Fox News? Or that something called the “Ground Zero mosque” would suddenly burst into prominence based on the hysterical blog posts of Pamela Geller? Or that we’d spend a couple of weeks talking about “anchor babies”?

If you did, you’re a lot smarter than me. So I’m more pessimistic. It’s an election year, and the idea that Obama is a secret radical remains a common trope among folks like National Review’s Andrew McCarthy and his like-minded scribblers. It’s also great for ratings among the talking-head set. So I suspect we’re going to see a lot more stuff like this. It’ll all just be a big coincidence that every few weeks produces yet another “controversy” that happens to appeal to underlying racial resentments, of course. There will be much tut-tutting about hypersensitive lefties seeing racism under every rock.

I hope to be proven wrong about this. We’ll see.