I’ve written so much about the hagiography of Paul Ryan among the Beltway media that I’m sick of it. You’re probably sick of it too. It’s been clear for years that no matter how wonky and mild-mannered an image Ryan projects, in reality he’s a garden-variety hard-right ideologue who has no interest in compromise and cares only about cutting taxes on the wealthy and slashing programs for the poor. I’m sure he thinks that cutting the deficit would be great 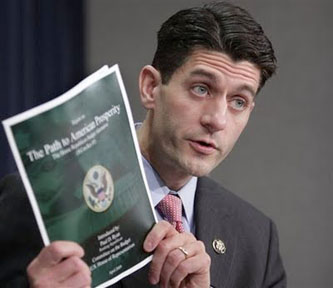 too, but it’s very plainly a distant third out of three goals.

Normally, I wouldn’t bother writing about this yet again, but today Jon Chait has such a mind-blowing example of Ryan’s hypnotic hold over DC reporters and pundits that you really have to read it to believe it. Here it is:

New York Times business columnist James Stewart, for instance, recently opined that Ryan’s plan would usher in an overhaul of the tax code that would raise taxes on the rich, by eliminating special treatment for capital-gains income.

It is certainly true, as Stewart argues, that one could reduce tax rates to the levels advocated by Ryan without shifting the burden onto the poor and middle class if you eliminated the lower rate enjoyed by capital-gains income. But Ryan has been crystal clear throughout his career in his opposition to raising capital-gains taxes….I asked Stewart why he believed so strongly that Ryan actually supported such a reform, despite the explicit opposition of his budget. “Maybe he’s being boxed in” by right-wing colleagues, Stewart suggested.

After Obama assailed Ryan’s budget, Stewart wrote a second column insisting that Ryan’s plans were just the sort of goals liberals shared. He quoted Ryan as writing, in his manifesto, “The social safety net is failing society’s most vulnerable citizens.” Stewart is flabbergasted that Democrats could be so partisan as to attack a figure who believes something so uncontroversial. “Does anyone,” Stewart wrote in his follow-up, “Democrat or Republican, seriously disagree?”

The disagreement, I suggested to Stewart, is that Ryan believes the social safety net is failing society’s most vulnerable citizens by spending too much money on them….Stewart waves away the distinction. “I was pointing out that, at least rhetorically, you can find some common ground,” he says. Stewart, explaining his evaluation of Ryan to me, repeatedly cited the missing details in his plan as a hopeful sign of Ryan’s accommodating aims. “He seems very straightforward,” he tells me. “He doesn’t seem cunning. He seems very genuine.”

Go ahead and read the whole thing if you have the stomach for it. It’s pretty flabbergasting. Ryan’s uncompromising hard-right bona fides have been obvious throughout his entire career, but somehow the fact that he quotes budget numbers off the top of his head and refrains from bellowing in public has turned him into a teddy bear in the eyes of much of Washington. Go figure.