The New York Times reports this weekend that the state of New York is in a meltdown over a recent piece of alleged standardized test idiocy. Here’s the nickel version: It’s about a short story on the 8th grade reading test. In the story, a pineapple (yes, a pineapple) challenges 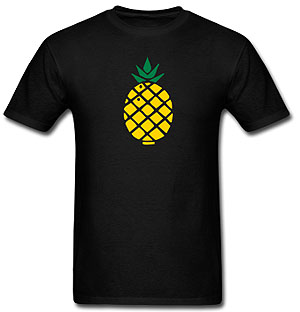 a hare to a race. The hare accepts. The pineapple insists it can win. But how? A nearby moose says the pineapple must have something up its sleeve. “Pineapples don’t have sleeves,” says the owl. Then the race starts, and the pineapple just stands there. A little while later the hare loops around to the finish line and the pineapple is still standing still. So the animals all eat the pineapple. The End.

This is obviously a nonsense story. Is that kosher for an 8th grade reading test, even if the kids all think it’s weird? Seems OK to me. But the real issue, apparently, is that two of the questions about the story have been judged too ambiguous. The kids were confused. This is something I’m normally sympathetic to, since I often see answers on standardized tests that strike me as tricky to judge even though I’m a whole lot smarter than your average 8th grader.

But this time I don’t see it. The story and the questions are here. The allegedly tricky questions are 7 and 8. But despite the nonsensical nature of the story, the answers seem pretty clear to me.

Nonetheless, “Pineapples don’t have sleeves,” has apparently taken on iconic stature in New York, and the state education commissioner has decreed that the questions won’t be counted in final scores. A victory for common sense!

So your mission, should you decide to accept it, is to read the story (it’s very short) and then look at the questions. Do they seem unfair? They don’t to me, but maybe I’m missing something.

UPDATE: A couple of specialists have emailed to say that on high-stakes tests like this one, the general rule is to allow very little ambiguity at all. The right answer should be extremely clear. If that’s the case, then I agree that this story and these questions should have been ditched. I don’t think the answers were all that ambiguous, but there was certainly some ambiguity.

That said, I guess I don’t understand why anything like this would have been invented in the first place. Is there really any need for creativity in tests like this? Or even a need to buy passages from published authors? Just construct a short piece, either fiction or nonfiction, and ask some straightforward questions about it. What’s so hard?