In a recession, you’d expect average pay to adjust to a lower level. As unemployment rises, workers should be willing to accept lower wages, and as wages drop employers should become more willing to hire new workers. If this doesn’t happen, the recession is likely to persist. One of the current problems in Greece and Spain, for example, is that their workers became increasingly uncompetitive over the past decade. One way to correct this is by devaluing their currency, which would effectively reduce wages countrywide compared to the rest of Europe, but because they’re both on the euro they can’t do this.

Another way to effectively reduce wages countrywide is to keep compensation constant but allow a higher inflation rate. If inflation is running at, say, 4%, and you get no pay increase this year, your wages have effectively gone down 4%.

But what if inflation is low? Then the only way to reduce wages is to actually reduce wages. For a variety of reasons, however, employers generally aren’t willing to do that. It just pisses off their workers too much. At least, that’s the theory. And the chart on the right, from a San Francisco Fed letter, demonstrates that it seems to be true. It tracks wage 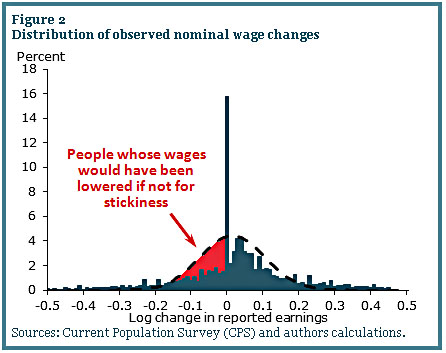 changes during 2011, and there’s a huge spike at zero. Employers don’t have a big problem handing out tiny raises and letting inflation do their dirty work for them, but they don’t like to directly reduce wages themselves:

This is supported by the large gap to the left of zero between the actual distribution of wage changes and the dashed black line representing the normal distribution. This gap suggests that the spike at zero is made up mostly of workers whose wages otherwise would have been cut.

The moral of this story is that tolerating high inflation during a recession is a helpful thing. The faster wages adjust, the faster the recession will be over, and a high inflation rate allows wages to adjust downward even if employers simply keep nominal pay flat. It’s probably too late for this to make much of a difference anymore, but an inflation target of 4% starting back in 2008 probably would have produced a stronger and faster recovery than the one we’re finally getting now.