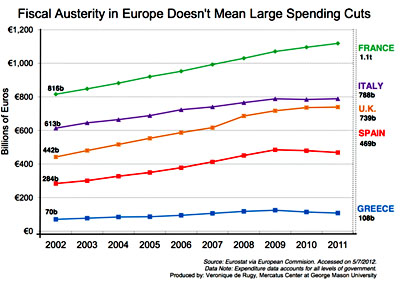 Via Tyler Cowen, Veronique de Rugy presents the chart on the right as evidence that Europe isn’t really undergoing any kind of real austerity after all. There are, obviously, some problems here: the figures are in nominal euros/pounds, there’s no adjustment for population growth, and anyway, the whole point of the anti-austerity Keynesians is that during a massive recession spending should be sharply higher, especially in the face of relatively tight central bank policy. Spending that’s flat or slightly down is massively contractionary.

But there are two other curiosities here that interest me more. First, de Rugy says this:

The most important point to keep in mind is that whenever cuts took place, they were always overwhelmed by large counterproductive tax increases….I wish anti-austerity critics would start acknowledging that taxes have gone up too — in most cases more than the spending has been cut.

Has this been a problem among the anti-austerity crowd? There are arguments over what kind of stimulus is most efficient, with Keynesians generally concluding that direct government spending is best, but their main obsession is simply about running big central government deficits any way you can. For this reason the Keynesian crowd all agrees that tax increases are counterproductive during a zero-bound recession, and that’s part of the reason for criticizing the European approach.

Also, if this data were adjusted for inflation (which I would prefer but the data isn’t available)….

What’s up with this? A few days ago I was trying to get European GDP numbers for some project or other, and about halfway through I realized that my data was no good unless it was in real dollars/pounds/euros. So I went looking, but couldn’t find numbers more recent than 2010. FRED didn’t have more up-to-date figures, and when I went to Eurostat they didn’t have them either. Why? They know the nominal numbers, and they have inflation data for each country, so why aren’t real GDP and spending figures available all the way up to Q1 of 2012?

In my case, I ditched the post I was planning to write because, although the nominal data made my point, it obviously wasn’t accurate. In de Rugy’s case, she just went ahead anyway. Which of us made the right call?

UPDATE: I have just been taught how to extract real GDP data from Eurostat. I’d tell you all how to do it, but then I’d have to kill you.

Seriously, whoever designed that interface should be shot. Why not just outsource their data presentation to the St. Louis Fed and dump it all into FRED?