The endocrine system is a collection of glands in the human body, including the thyroid, pituitary, and adrenal glands. Endocrine hormones regulate growth, blood pressure, serum glucose levels, and a whole 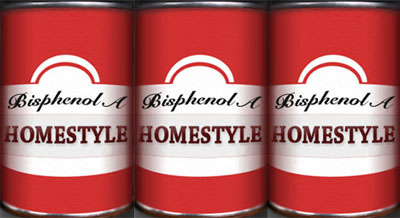 host of other things. In other words: they’re important! Naturally, then, we’re doing our best to screw up our endocrine systems. Here’s Nick Kristof:

Endocrine disruptors are everywhere. They’re in thermal receipts that come out of gas pumps and A.T.M.’s. They’re in canned foods, cosmetics, plastics and food packaging. Test your blood or urine, and you’ll surely find them there, as well as in human breast milk and in cord blood of newborn babies.

In this campaign year, we are bound to hear endless complaints about excessive government regulation. But here’s an area where scientists are increasingly critical of our government for its failure to tackle Big Chem and regulate endocrine disruptors adequately.

….Scientists have long known the tiniest variations in hormone levels influence fetal development….Now experts worry that endocrine disruptors have similar effects, acting as hormones and swamping the delicate balance for fetuses in particular. The latest initiative by scholars is a landmark 78-page analysis to be published next month in Endocrine Reviews, the leading publication in the field.

….Big Chem says all this is sensationalist science. So far, it has blocked strict regulation in the United States, even as Europe and Canada have adopted tighter controls on endocrine disruptors.

Yes, there are uncertainties. But the scientists who know endocrine disruptors best overwhelmingly are already taking steps to protect their families. John Peterson Myers, chief scientist at Environmental Health Sciences and a co-author of the new analysis, said that his family had stopped buying canned food.

“We don’t microwave in plastic,” he added. “We don’t use pesticides in our house. I refuse receipts whenever I can. My default request at the A.T.M., known to my bank, is ‘no receipt.’ I never ask for a receipt from a gas station.”

In the same way that we used to poison ourselves with lead, we’re now poisoning ourselves with endocrine disruptors. Why? Because corporations who make lots of money from poisoning us say everything is OK. Just like they said lead was OK. And cigarettes. And benzidine. And chromium 6. And asbestos. And PCBs. And beryllium. And Vioxx. You’d think that even our venal political class would eventually learn not to listen to these guys, if only for the purely selfish reason of protecting their own children, but there’s just too much money involved. So they go on scratching their chins and pretending that the “studies” produced by industry should be taken seriously. And we keep on poisoning ourselves.

For more, check out Judith Shulevitz’s piece in the New Republic last year.