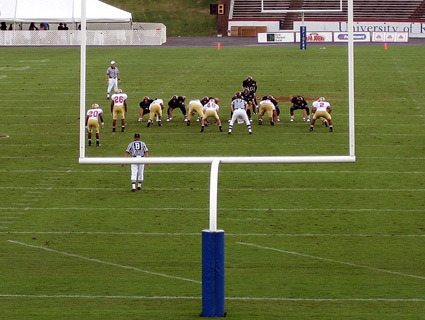 This morning I mentioned (and praised) Norm Ornstein and Thomas Mann’s new book, It’s Even Worse Than It Looks, which basically blames Republicans for the collapse of governance over the past couple of decades. The headline on the op-ed version of their book makes the point even more bluntly: “Let’s just say it: The Republicans are the problem.”

But Matt Steinglass catches even Ornstein and Mann not quite having the courage of their convictions. In the op-ed, they use a football metaphor to describe how the two parties have evolved since the end of the Reagan era: “While the Democrats may have moved from their 40-yard line to their 25, the Republicans have gone from their 40 to somewhere behind their goal post.” But that’s really not true:

The Democrats, as far as I can see, have moved from their 40-yard-line to midfield, or their opponents’ 45. As recently as the Clinton presidency, Democrats actively pushed for gun control, defence budgets under 3% of GDP, banning oil exploration off America’s Atlantic and Pacific coasts, a public option or single-payer solution to universal health insurance, and…well, Clinton-era progressive income-tax rates. Today these positions have all been abandoned. And we’re talking about positions held under Bill Clinton, a “third way” leader who himself moved Democratic ideology dramatically to the right, the guy responsible for “ending welfare as we know it”. Since then, Democrats have moved much further yet to the right, in the fruitless search for a compromise with a Republican Party that sees compromise itself as fundamentally evil. The obvious example is that the Democrats in 2010 literally passed the universal health-insurance reform that had been proposed by the GOP opposition in the Clinton administration, only to find today’s GOP vilifying it as a form of Leninist socialist totalitarianism.

And Matt doesn’t even mention education policy, civil liberties, or crime, all areas where Democrats have also moved to the right since the end of the ’80s.

So where have Democrats moved to the left? Gay rights is one area, I suppose. Climate change is another: at least Obama tried to pass a cap-and-trade bill. And you could say that compared to the Clinton/Rubin era, Democrats are a bit more willing to regulate the financial sector than they used to be. Beyond that, there are maybe a couple of other arguable cases, but nothing of much significance.

The irony here is that Ornstein and Mann are explicitly arguing that reporters and pundits should drop the “both sides are responsible” pose and call a spade a spade. But even they feel the need to hedge a little. Nevertheless, the truth is that both sides haven’t moved away from the center. Only Republicans have, and Democrats have spent the past 20 years chasing them in hopes that eventually they could reach some kind of reconciliation. But it never did any good. The Democratic move rightward was interpreted not as a bid for compromise somewhere in the middle, but as a victory for a resurgent conservative movement that merely inspired them to move the goalposts even further out.

Is it any wonder that so many Democrats are no longer in any mood to appease the right? It hasn’t exactly been a winning strategy for liberal ambitions, has it?