The Washington Post reports that there’s just no pleasing the American public:

This is a group that health reform was theoretically supposed to help. Back in August 2009, a Kaiser Family Foundation poll found that people who were less satisfied with their current health care 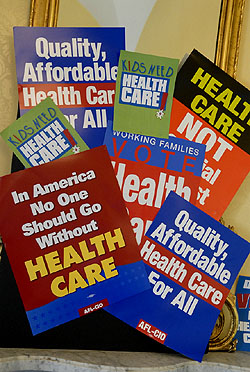 were more likely to believe it would improve under health care reform. That clearly hasn’t happened.

In short, people like neither the status quo nor the new version.

This is less surprising than it seems. For starters, people are just in a sour mood these days thanks to a dismal economy and the endless, partisan bickering in Washington DC. What’s more, they’ve been assaulted by hundreds of million of dollars of brutally negative advertising about Obamacare and by a relentless campaign of vilification from the Rush/Fox/Drudge axis.

And it sure hasn’t helped that after Obamacare passed, Democrats could hardly scurry into their hidey holes fast enough. Instead of defending the law as a historic guarantee of health insurance even if you’re sick or poor or out of work or self-employed, they clammed up. If Democratic leaders don’t believe in the bill, and don’t take the time to extol its virtues, why should we expect anyone else to?

Beyond that, though, let’s be honest. What we all want is unlimited access to medical care; unlimited access to any procedure we want no matter how pricey; unlimited choice of physicians; instant availability of doctors every time we get an ear ache; and we’d like all this for free. That’s what we want. And we’re annoyed when we don’t get it.

This means that we’re always going to be annoyed no matter what kind of healthcare system we have. And guess what? That’s true. Surveys from around the world prove it. In pretty much every country, people complain about their healthcare systems. Americans generally complain more than most, which makes sense since our healthcare system is so bad, but it’s only a matter of degree. The truth is that healthcare is just a tough nut to crack and sick people are cranky. No one is ever going to be satisfied, not with the status quo or with any conceivable replacement.

Still, that’s no excuse for the excruciating lack of support for Obamacare on the left, which ranges from simple cowardice to outright derision because it doesn’t solve every healthcare problem in the world immediately. When I’m in a particularly black mood, I think that it would simply serve us right if the Supreme Court overturned the entire bill. If we refuse to support — really, loudly, insistently support — the biggest advance in social legislation since the 1960s, why should we expect anyone else to?