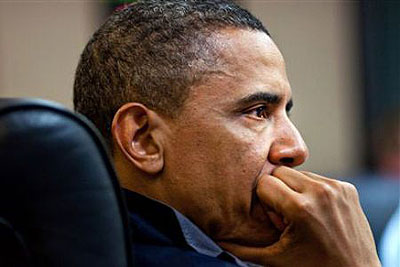 Will Wilkinson acknowledges that Darrell Issa’s campaign to crucify Eric Holder over the Fast & Furious program is probably just an election-year witch hunt. But he doesn’t care:

The executive has taken far too much power from the legislative branch, much to the detriment of democratic principles. I don’t much care why in a particular case Congress wishes to assert its prerogatives against the executive. Whenever it finds the motivation, I’m for it. So this is an election-year ploy I’m happy to see. The people’s representatives in government have a right to the information they need to hold the agents of the state accountable. They’ve asked. The executive has an obligation to comply. It’s that easy.

Meanwhile, over at the Washington Post, Charles Krauthammer argues that President Obama’s newfound belief that he can unilaterally change immigration laws is “naked lawlessness”:

Prosecutorial discretion is the application on a case-by-case basis of considerations of extreme and extenuating circumstances. No one is going to deport, say, a 29-year-old illegal immigrant whose parents had just died in some ghastly accident and who is the sole support for a disabled younger sister and ailing granny. That’s what prosecutorial discretion is for. The Napolitano memo is nothing of the sort. It’s the unilateral creation of a new category of persons — a class of 800,000 — who, regardless of individual circumstance, are hereby exempt from current law so long as they meet certain biographic criteria.

This is not discretion. This is a fundamental rewriting of the law.

I think both of these gentlemen are overstating things. In the case of the F&F fishing expedition, it’s not actually quite “that easy.” There are legitimate grounds to exert executive privilege, and Obama might be exercising one of them.

As for Krauthammer, overstating things is his stock in trade. As he knows very well, given limited resources, presidents have routinely set national enforcement and prosecutorial priorities at a policy level: more time on X, less time on Y, don’t bother with Z. It’s hardly unprecedented.

And yet, can I say that I think they both have a point? Sure, Issa submarined his own credibility by refusing Holder’s offer to let his committee “review” the documents he wanted to see, but at the same time, I’m not gullible enough to believe that all the documents Issa has subpoenaed are truly protected conversations. Some may be, but I suspect that many are simply embarrassing. As with every other executive privilege case I can think of, I sure wish there were some sort of neutral third party that could adjudicate this stuff. Some third branch of government or something. That would help things along, wouldn’t it?

As for mini-DREAM, presidents may set enforcement priorities, but Krauthammer is right when he says it’s rare to see such a sweeping decision to simply not enforce the law under specific circumstances. As much as I approve substantively of what Obama has done, I think the authority of the president to ignore laws he doesn’t like is — or at least should be — distinctly limited. Mini-DREAM sets a bad precedent.

I don’t think either of these things are huge issues. Nowhere near as big as any of half a dozen national security policies I can think of. Mostly this is just election-year politics, red in tooth and claw. Nonetheless, I’m uneasy with both of these decisions.