Do you want to know today’s funniest story? Apparently there’s been a vast social media row asking whether the Washington Monthly got a little too steamy in its current issue when it ran this photo to illustrate a piece about the lack of women on DC think tank panels. The Washington Monthly! A 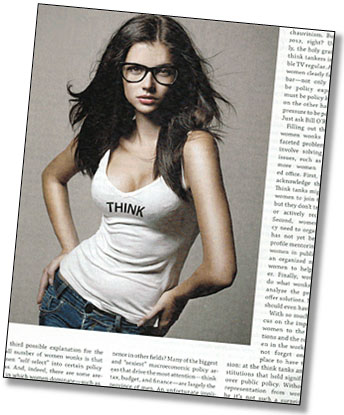 magazine best known for 5,000-word pieces about tax expenditures and the fate of small-city airports! It’s sort of like finding a provocative picture illustrating the minutes of the latest Federal Reserve meeting.

Well, it had to happen someday. Today, in an effort to get ahead of the firestorm, the Monthly’s blog ran a post from the author of the article, Anne Kim, who said she likes the picture just fine:

The photo isn’t inappropriate; it’s provocative. And it directly challenges people to confront their own biases about how beauty (or the lack thereof) affects the prospects for a woman’s success in ways that men don’t have to deal with. No one wants to admit that they take a woman’s looks into account when they make judgments about her intellect, and that’s why this photo makes people uncomfortable. Let’s face it — how many of us assumed that the woman in the picture had an IQ lower than her bra size?

Would I have run this photo? Nah. But I’m boring. I probably would have womped up a chart or something. Still, it’s hardly likely that the Monthly was trying to pump up readership with this picture. It wasn’t on the cover, after all, or even on the front of the website. And I don’t think that one suggestive picture in ten years is going to make the Monthly a go-to destination for Beltway lechers. It was obviously meant to be provocative/ironic in exactly the way Kim suggests. Hell, knowing the Monthly, I wouldn’t be surprised to learn that they ran it because it was the best illustration they could find that was free.

Either way, though, I’m just happy that this twitterstorm erupted over a photo in the good ol’ Washington Monthly instead of one of the usual suspects, like the Daily Beast or the Atlantic. It’s about time they got some heat for being too damn flashy.