Andrew Sullivan thinks that defeat in November will chasten Republicans and make them more likely to compromise. I doubt it. I think it takes several successive defeats to accomplish that (think Democrats under Reagan/Bush or Labor under Thatcher/Major), and at least one of those defeats needs to be a big one. But Republicans won the 2010 midterms, and if they lose this year it will probably be close. That’s just not enough to convince them that they need to change.

But who knows? Maybe a few of them will see the writing on the wall, and Obama will certainly have more leverage over Congress in January if he lets the Bush tax cuts expire in December. That might force some tax compromises in the short term. But I’m even more skeptical of Sullivan’s followup:

I think Americans want a fiscal compromise on a sane, Bowles-Simpson line. And radical tax reform is an area of common ground. That kind of deal is normally only possible in a second term, when the president is not going to get political capital for it, and if it is bipartisan, which was the idea behind Bowles-Simpson as well.

….And on immigration, all you need is a few Republicans to absorb the lesson of alienating the critical Latino constituency. If Jeb Bush and Karl Rove came out for a deal, and they both support one, politics change change. In other words, as I wrote, this is about the shift in thinking, a change in leverage after an election, not before it. Elections can concentrate the mind. The GOP loves to win and if it sees its current path is doomed, the fever, in Obama’s metaphor, might break.

Do Americans really want Bowles-Simpson? I guess anything’s possible, but if something like this passes it will most likely be in spite of the American public, not because of it. I know that “compromise” sounds great, and lots of Americans say they’re in favor of it, but when push comes to shove what that usually means is that they think the other guys should compromise. The tax jihadists still won’t want tax increases and the interest groups still won’t 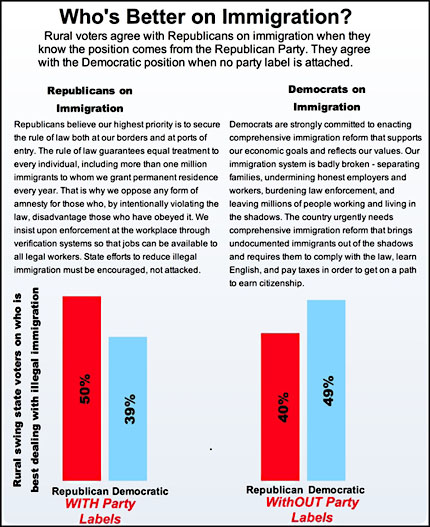 want spending cuts and old people will still fight Medicare and Social Security reform to their dying breath. It’s not impossible for some kind of Bowles-Simpson-ish thing to happen, but the truth is that it will almost certainly be unpopular. Politicians will have to drag the public into it, not the other way around.

Immigration might be a different story, though. I think a lot of Republican pols really do understand that diehard opposition to immigration reform is killing them, and the political calculus is different too. At this point, I suspect that big business would mostly be willing to support a reasonable bill, even if it contains tough employer sanctions; e-Verify continues to generate opposition, but it’s declining as the accuracy of the system gets better; Obama has spent four years amping up border security; and hardcore opposition to immigration may well be smaller than we think. Yesterday, for example, Bill Bishop reported on a very interesting poll that asked rural voters about immigration policy. It turns out that if you read them the Democratic position, only 39% support it. But if you read it to them without telling them it’s the Democratic position, 49% support it. That could well go up to 60% or higher if compromise language became the de facto Republican position.

So then: short-term tax compromise? Quite possible. Immigration reform? Somewhat possible. Bowles-Simpson? Not impossible, but the public will have to be dragged into it kicking and screaming.