Over at Power Line, Steven Hayward says the picture on the right “ought to cost Obama this election.” In case you haven’t been following events in wingnut land, this is a picture of LA sheriff’s deputies taking in Nakoula Basseley Nakoula for questioning a few days ago. Nakoula is the guy behind the anti-Islam 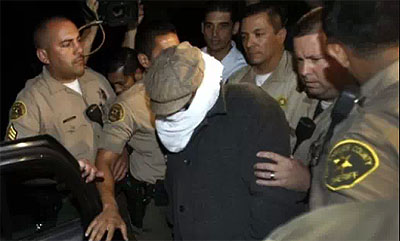 YouTube video that supposedly sparked all the recent turmoil in the Middle East. Adam Serwer explains what’s going on:

As Roy Edroso documents in the Village Voice, conservatives are now claiming that Nakoula’s recent arrest for potentially violating the terms of his probation is proof the Obama administration is caving to violent protests around the world. Popular conservative blogger Glenn Reynolds demanded Obama resign for “sending — literally — brownshirted enforcers to engage in — literally — a midnight knock at the door of a man for the non-crime of embarrassing the President of the United States and his administration[.]” The “brownshirts” are the Los Angeles County Sheriff’s Department, whom Reynolds is comparing to militia of the Nazi Party in Germany. Powerline blogger Scott Johnson declared “I am Nakoula Basseley Nakoula,” (a reference to the anti-Red Scare film Spartacus). Pajamas Media blogger Roger Simon wrote “Hillary Clinton, I insist that you have me arrested. I am thinking of making a movie about Mohammed.”

Speakers at the annual Values Voters gathering of mostly Christian religious conservatives on Saturday were drawing similar conclusions. “The big headline this morning is ‘federal authorities investigate Christian filmmaker because of this film,” Fox News commentator Todd Starnes told attendees during a panel on religious freedom.

It is, of course, vanishingly unlikely that the Obama administration had anything to do with Nakoula’s questioning. But it’s certainly been fascinating to watch Nakoula morph into a right-wing hero within a matter of days. Initially, even the most zealous conservatives merely claimed that the Obama administration wasn’t defending free speech strongly enough. The reasons were slightly obscure, but when pressed they usually said that a defense of free speech should have been in the first sentence of some statement or other, rather than the second. Or something. But they didn’t actively defend Nakoula.

But now he’s a conservative martyr. Not because the Obama administration did anything to him, but because they can weave some kind of weird conspiracy theory linking probation officers in Los Angeles County to the White House. Within a heartbeat, Obama was Hitler and Nakoula was a “Christian filmmaker” who was being persecuted.

What makes this all the more bizarre is that, as Adam points out, the Obama administration actually has done a couple of things that are pretty iffy:

Some of the Obama administration’s decisions do raise free-speech concerns, however. The government’s inquiry to YouTube about whether the video violated the site’s terms of service was potentially coercive. So was the call that Gen. Martin Dempsey, the chairman of the Joint Chiefs of Staff, made to a fringe Florida pastor to urge him to stop supporting the film.

You’d think this would be enough of a hook for conservatives to attack Obama. But no. Obama’s got to be Hitler and Nakoula has to be a martyr to his thuggish politics. This, ladies and gentlemen, is the modern conservative movement at work.