The latest mandate handed down from the Environmental Protection Agency (EPA) is so ridiculous, even I was shocked. The EPA has now mandated how much gasoline you must buy at certain gas stations. Say hello to the Obama Administration’s four gallon minimum.

So what’s this all about? Well, the ethanol industry has been lobbying for a quite a while to sell E15 — a blend of 85% gasoline and 15% ethanol. Why? Because they want to sell more ethanol, and E15 contains more ethanol than the current E10 blend. But they’re not the only ones in favor of E15. The Renewable Fuel Standard, passed in 2007, requires ever greater use of ethanol, and refineries are afraid that before long they won’t be able to meet the RFS standards unless they can sell the E15 blend.

Both the ethanol and petroleum industries are so odious that it’s hard to pick sides here. As it turns out, though, the anti-E15 crowd has some intriguing arguments. The primary one is that E15 only works in cars manufactured after 2001. It doesn’t work in older cars, it doesn’t work in boats, 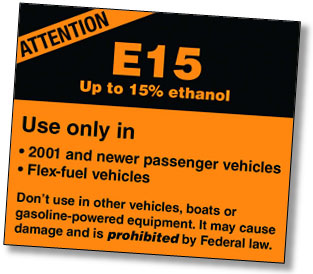 and, as the Outdoor Power Equipment Institute will tell you, it doesn’t work in devices like chain saws, utility vehicles, and lawn mowers. In fact, it can destroy those things if you use it accidentally.

But it gets worse. Most gas stations don’t want to install new tanks just for E15. Instead, they’re installing blender pumps, which mix the ethanol and gasoline together in the right proportion depending on which one you want. But there’s a problem: if you pump E15 into your car, about a third of a gallon remains in the fueling hose when you’re done. If someone comes along, switches to E10, and buys a single gallon for their lawnmower, they’ll get a third of a gallon of E15 and two-thirds of a gallon of E10. That comes to about 11.7% ethanol, and that might be enough to set your lawnmower on fire.

So the EPA produced a new rule: if you sell E15, you have to require your customers to buy at least four gallons of gas regardless of what blend they’re buying. That’s a big enough purchase that the residual fuel in the hose is too small to matter. So let’s count up the problems here:

These aren’t actually gigantic problems, and if ethanol truly had a lower carbon footprint than gasoline I might figure that it was worth going through some minor growing pains to encourage greater use of it. But it’s really not. So to my surprise, I find myself agreeing with Sensenbrenner. If we ever get to the point where we can mass-produce ethanol that’s truly better for the environment than petroleum (cellulosic ethanol, cane ethanol, etc.), then it might be worth going through all this. Until then, it’s probably not.

And the Renewable Fuel Standard that started all this? It wasn’t such a great idea in the first place, and as long as it mandates increased use of corn ethanol it never will be. It deserves a thorough revision.