Last night I argued that although President Obama turned in a weak debate performance on Wednesday, his bigger problem was the wild overreaction of liberal talking heads immediately after the debate. Joan Walsh of Salon takes issue 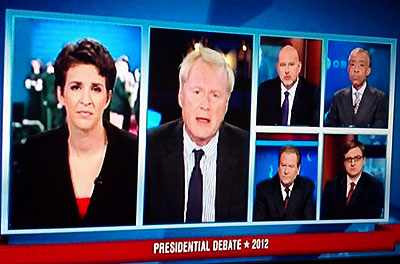 with this today, and she lands some good punches. But I particularly want to respond to one of the things she says:

Can Drum truly believe that mainstream media reporters take their cues from liberals on TV? Some 58 million people watched the debate; maybe a few million watched MSNBC afterward. Could Chris Matthews and Ed Schultz really define Obama’s debate performance as poor in the absence of evidence that it was, well, poor?

Let’s take these one at a time. First, do mainstream reporters take their cues from liberals on TV?

Normally, no. But this isn’t a normal news story. It’s an explicitly partisan event, one where news reporters would normally be required to cover it straight: Obama said X, Romney said Y, blah blah blah. If both sides insist that their guy did well, that’s about all the mainstream folks can say. But when Chris Matthews and Ed Schultz and Joan Walsh all deliver stinging denunciations of Obama’s performance, this gives them permission to report as fact that Romney won. See, even liberals agree! And sure enough, that’s how things eventually congealed. This is a fundamental point about how the modern media works, one that we fail to understand at our peril.

Second, can TV talking heads really define Obama’s performance? I think so. I admit that the evidence here is thin, but the polling I saw suggests that viewers polled during the debate thought it was about even; viewers polled right after the debate though Romney had won; and viewers polled a little later still thought it was a rout. I can’t think of any good explanation for this aside from the effect of the talking heads right after the debate and the firestorm of liberal criticism that quickly turned into a feeding frenzy of outrage. And generally speaking, I’d say there’s plenty of historical evidence that media coverage of presidential debates has much more impact than the debates themselves. (However, I’d be very interested if someone could point me to a solid analysis of poll data on this question. I’m basing this on what I saw and read at the time, but my memory might be faulty.)

For the record, I should note that I’m making an observation here, not an endorsement. Walsh says, “Certainly if Drum thinks it’s my job to be Sean Hannity in lipstick, repeating David Axelrod’s talking points every night, that’s not a job I’m interested in.” Me neither! Nonetheless, there’s a clear price to be paid for this, and I think we saw an unusually dramatic demonstration of it last Wednesday.