In my piece a few months ago about the Republican push for voter ID laws (“The Dog That Voted”), I hung my narrative largely around Thor Hearne, the little-known Republican lawyer who founded the American Center for Voting Rights in 2005 and spent the next two years barnstorming the country with grim tales of voter fraud and stolen elections. Then, having tilled the field, he disappeared, leaving others to finish up the task of passing voter ID laws all over the country.

But if Hearne was the policy entrepreneur who got it all started, Hans von Spakovsky is the ubiquitous snake oil salesman who’s become the most persistent foot soldier in the voter fraud wars. In the New Yorker this week, Jane Mayer profiles the man who has become the most famous and brazen purveyor of voter 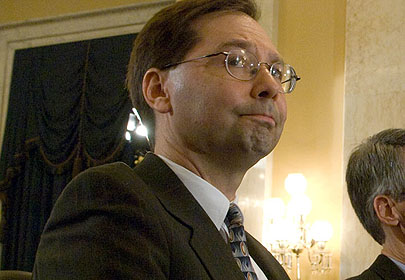 fraud whoppers in the country. Here she is on the issue of people casting ballots under a false name:

Von Spakovsky offered me the names of two experts who, he said, would confirm that voter-impersonation fraud posed a significant peril: Robert Pastor, the director of the Center for Democracy and Election Management, at American University, and Larry Sabato, a political-science professor at the University of Virginia. Pastor, von Spakovsky noted, had spoken to the U.S. Commission on Civil Rights about being a victim of election fraud: voting in Georgia, he discovered that someone else had already voted under his name.

When I reached Pastor, he clarified what had happened to him. “I think they just mistakenly checked my name when my son voted—it was just a mistake.” He added, “I don’t think that voter-impersonation fraud is a serious problem.” Pastor believes that, compared with other democracies, America is “somewhere near the bottom in election administration,” and thinks that voter I.D.s make sense—but only if they are free and easily available to all, which, he points out, is not what Republican legislatures have proposed. Sabato, who supports the use of voter I.D.s under the same basic conditions, says of the voter-impersonation question, “One fraudulent vote is one too many, but my sense is that it’s relatively rare today.”

This is typical von Spakovsky. He routinely throws out incendiary charges, apparently hoping that either no one will check up on them or that no one will care once they eventually hear the real story. Rick Hasen wrote about his encounters with von Spakovsky in some detail in The Voting Wars, and he talked to Mayer for her piece:

Hasen, who calls von Spakovsky a leading member of “the Fraudulent Fraud Squad,” told me that he respects many other conservative advocates in his area of expertise, but dismisses scholars who allege widespread voter-impersonation fraud. “I see them as foot soldiers in the Republican army,” he says. “It’s just a way to excite the base. They are hucksters. They’re providing fake scholarly support. They’re not playing fairly with the facts. And I think they know it.”

To repeat a point I’ve made before: there’s only one kind of fraud that voter ID laws can stop: impersonation fraud, where someone tries to vote under a false name. Even in theory, ID laws can’t stop ballot box stuffing or registration fraud or machine tampering or any other kind of vote fraud. They can only stop impersonation fraud.

And impersonation fraud just doesn’t exist. No politician would be insane enough to try it on a broad enough scale to throw an election, and virtually no individuals are insane enough to risk a felony just for the sake of casting a single vote:

Hasen says that, while researching “The Voting Wars,” he “tried to find a single case” since 1980 when “an election outcome could plausibly have turned on voter-impersonation fraud.” He couldn’t find one. News21, an investigative-journalism group, has reported that voter impersonation at the polls is a “virtually non-existent” problem. After conducting an exhaustive analysis of election-crime prosecutions since 2000, it identified only seven convictions for impersonation fraud. None of those cases involved conspiracy.

Photo ID laws are a scam. Republicans loudly deny that their real purpose is to suppress the vote among blacks, students, and the poor — all of whom have lower than average rates of possessing photo ID — but what other motivation is left? They have no impact on voter fraud and everyone knows it.