I’m a little tired of debate navel gazing, so let’s look around for other topics to talk about. Glenn Greenwald must have one. Let’s take a look:

Wednesday night’s debate between Barack Obama and Mitt Romney underscored a core truth about America’s presidential election season: the vast majority of the most consequential policy questions are completely excluded from the process….In part this is because presidential elections are now conducted almost entirely like a tawdry TV reality show….But in larger part, this exclusion is due to the fact that, despite frequent complaints that America is plagued by a lack of bipartisanship, the two major party candidates are in full-scale agreement on many of the nation’s most pressing political issues. As a result these are virtually ignored, drowned out by a handful of disputes that the parties relentlessly exploit to 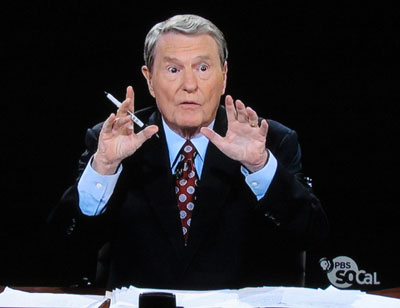 galvanise their support base and heighten fear of the other side.

Most of what matters in American political life is nowhere to be found in its national election debates. Penal policies vividly illustrate this point.

Damn. Even Glenn is talking about the debate. He thinks that allowing third-party candidates to participate would “highlight just how similar Democrats and Republicans have become, and what little choice American voters actually have on many of the most consequential policies.” Maybe. But keep in mind that the topics of last night’s debate were chosen in advance by Jim Lehrer. Here they are:

Penal policy wasn’t there, so it wouldn’t really matter much if Gary Johnson had been on the stage. The problem here was the moderator, not the two-party system.

However, there will be a stronger case for a third-party presence in the next debate, which includes foreign policy topics. Even if Candy Crowley sticks to the big-ticket topics — Iran, Afghanistan, China, etc. — a third-party candidate like Johnson would have genuinely different things to say. At the same time, I wouldn’t expect too much from this. Ron Paul participated in all of the Republican primary debates, and he didn’t noticeably move the public opinion needle on foreign policy issues. I’m not sure Gary Johnson would either.

Still, maybe he should have a chance to try. So here’s a question for the hivemind: what’s fair here? The current threshold is that candidates have to score at least 15% in selected polls to be invited to the debates, and this year no one has qualified. Gary Johnson is around 3% nationally. But maybe that’s the wrong threshold. I’m violently opposed to a really small threshold, like 1% or so, because it has the potential to turn the debates into a circus. (Well, more of a circus.) The public really does deserve to get a good close look at the two major-party candidates, since one of them is certain to win the election, and having half a dozen true-believing obsessives on stage doesn’t help that.

This system has the virtue of ensuring that the non-mainstream has at least some representation, but without turning the debates into a free-for-all. Comments?