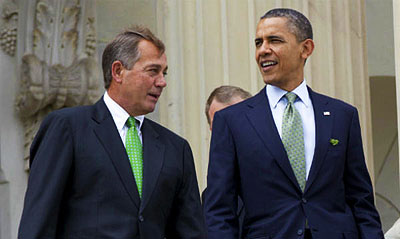 In an op-ed today, House Speaker John Boehner said that Obamacare needs to be on the table during negotiations over the fiscal cliff:

The president’s health care law adds a massive, expensive, unworkable government program at a time when our national debt already exceeds the size of our country’s entire economy. We can’t afford it, and we can’t afford to leave it intact. That’s why I’ve been clear that the law has to stay on the table as both parties discuss ways to solve our nation’s massive debt challenge.

Democrats aren’t very happy about this, but honestly, it’s the same thing Boehner has been saying for the past couple of weeks. Here he is two days after the election:

It’s pretty clear that the President was re-elected, Obamacare is the law of the land. I think there are parts of the health care law that are going to be very difficult to implement and very expensive and at a time when we’re trying to find a way to create a path toward a balanced budget, everything has to be on the table….There are certainly maybe parts of it that we believe need to be changed — we may do that, no decisions at this point.

So what’s the point of all this? Greg Sargent suggests that Boehner knows he’s going to have to compromise on taxes sometime soon, and this is a way of building up some much-needed cred with the conservative base before that grim day comes to pass:

In that context, this latest could be another sop to the Tea Party — reassurance to the Tea Partyers who are soon going to be asked to accept some very uncomfortable compromises on the fiscal cliff that, don’t worry, really, seriously, the GOP leadership still has Obamacare in the crosshairs! But Dems see a serious side to this. One Dem I spoke to worried that the mere fact that Boehner still has to throw sops like this to the Tea Party wing means he feels more beholden to them than Dems had hoped — which wouldn’t bode well for the talks.

I guess I’d take this as fairly ordinary jockeying for position during a difficult negotiation. Boehner knows he doesn’t have a lot of leverage, and threatening Obamacare—which Democrats care about a lot—is a good pressure point. It’s just one more bargaining chip he can use to limit the damage on the tax side of things. Keeping it on the front burner is probably just smart politics.