I have deliberately ignored the fiscal cliff machinations over the past few days. It’s a holiday weekend, after all, and the rumors and reports of rumors barely seemed worth acknowledging anyway.

But the 11th hour is now upon us, so where are we? As near as I can tell, we’re in la-la-land. A grand bargain has been off the table ever since John Boehner fell on his face when his own colleagues wouldn’t support his “Plan B” proposal, so now we’re 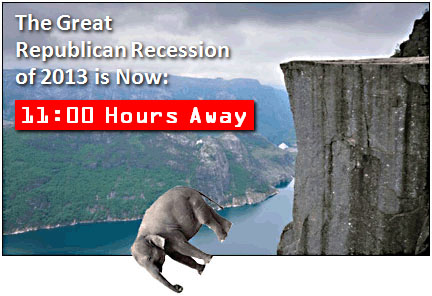 looking at a non-grand bargain. Supposedly, this will just be a small deal that keeps middle-class income taxes from rising but not much else.

So what’s the latest gossip? Well, over the weekend Republicans briefly tried to insist that Social Security be cut (via adoption of chained CPI), but then backed down immediately when it became clear that they’d actually have to take ownership of the idea, rather than pretending that it was a Democratic demand and they were merely acquiescing to it. As usual, when it comes to entitlement cuts, Republicans like to talk a big game, but are unwilling to make actual proposals that they can be held accountable for.

So now what? Supposedly, Republicans are now suggesting a deal in which taxes go up for those making over $450,000, rather than those making over $250,000. This is ridiculous. Not only would it raise only a tiny sum, but it won’t even have much impact on the rich unless it’s also accompanied by increases in the capital gains, dividends, and estate taxes, all of which Republicans are fighting. At the same time, taxes on the working class would go up because Republicans are insisting on the expiration of the payroll tax cut and the stimulus tax cuts. In return for this absurdly wealth-tilted deal, Democrats would get….something. It’s not really clear what. Perhaps a one-year delay of the sequestration spending cuts. But since those cuts affect both defense spending and domestic spending, that’s something Republicans want as much as Democrats. Ditto for the AMT patch and the doc fix, which are basically nonpartisan. Brian Beutler wraps things up pretty well:

In a tremendous irony, Republican requests for lower tax rates, a high estate tax threshold, and a permanent AMT fix — combined with Democratic requests to delay the sequester, include a “doc fix” for Medicare physicians, and extend emergency unemployment benefits — have left the parties negotiating toward a plan that would result in no net deficit reduction over 10 years on a current-policy baseline, according to Senate Majority Whip Dick Durbin.

This is nuts. I suppose the details could end up looking better than I think, but honestly, based on what I’m seeing so far, Democrats would be crazy to agree to this. At the very least, we need a clean tax increase on high-income Americans. If the only way to get that is to let tax rates go up tomorrow, and then negotiate from there, then that’s what they should do. It’s time to stop the serial cave-ins to the tax jihadists in the Republican Party.