Dylan Matthews has a good interview today with Barak Orbach, a professor of law at the University of Arizona, about the influence that Robert Bork had on antitrust law. In a nutshell, he is antitrust law. Pretty much all of modern antitrust doctrine can be traced back to books and articles he wrote in the 60s and 70s.

I was going to write about this yesterday, but I’m glad I waited. Here’s Orbach:

In 1960, he was concerned the socialists would take over the country through antitrust. Antitrust then was about protecting small businesses. He built a full framework about how antitrust should be more about economic efficiency than about helping small businesses. He expanded upon this in articles and the book, The Antitrust Paradox, in 1978. He wrote a sentence: Congress enacted the Sherman Act as a “consumer welfare prescription.” The Supreme Court adopted that sentence in 1979. That is the stated goal in antitrust today. It is a big deal. A huge deal. In antitrust, it’s operational. Robert Bork defined it.

….Bork came around and said that we were protecting inefficient businesses. That was one of his most significant contributions. There’s always a trend that big businesses go up, and then people have this sentiment that we should protect small businesses. So that was one thing that he created. He created this framework 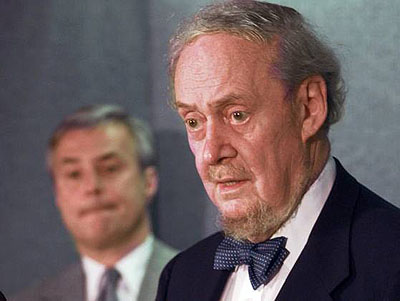 where antitrust should be efficient. He introduced economics into antitrust in a really systematic matter.

Read the whole thing for more. Bork, of course, was part of the Chicago School, which has been enormously influential in both economics and law over the past four decades. The problem is that there’s something tautological about their beliefs. Bork, for example, believed that antitrust law shouldn’t be about bigness per se, it should be about efficiency. But the Chicago school believes that successful companies are efficient almost by definition. If they weren’t, they wouldn’t have gotten big. George Priest, an admirer of Bork, explains:

That portion of Chicago School thought that addresses industrial organization derives from a single basic principle: Markets in the real world are generally highly competitive, constrained only by real costs of operation. It follows from this proposition […] that actions taken in the market by a single firm generally represent a means for advancing the interests of the firm by providing value to consumers. Put conversely, if a firm’s practices did not provide value to consumers, the firm would fail in the competitive battle. Thus, there is a presumption in Chicago School analysis that individual firm practices generally benefit competition and consumers, rather than the reverse.

This is where we are today. In the past, we had a relatively simple rule: companies weren’t allowed to get too big, because that was presumptively a bad thing. Today, we’ve replaced this with a much fuzzier rule: companies are allowed to get as big as they want as long as they’re still providing good value to consumers. But this gives corporations far more leeway in antitrust cases. They can present trainloads of evidence suggesting that consumers benefit from everything they do, and judges have to pick their way through it. Since it’s very hard to prove that consumers would or wouldn’t benefit under a different regime, it’s very hard to win an antitrust case.

Is this the right approach? We can argue it all day long. But in the same way that constitutional originalism, whether right or wrong in the abstract, is inherently conservative, the consumer welfare approach to antitrust is inherently friendly to big business. It’s all part of the “intellectual capture” of the past several decades, in which virtually all of us, liberal and conservative alike, have adopted views that, in the end, benefit big business and big finance. The intellectual superstructure is a bit different in every case, but the end result is consistent: the market operations of large corporations are assumed to be beneficial unless proven otherwise. And modern law and economics make proving otherwise damn near impossible.

An intellectual revolution has underpinned all this. But make no mistake: the real-world goals were always very clear. Today, we live in that world.