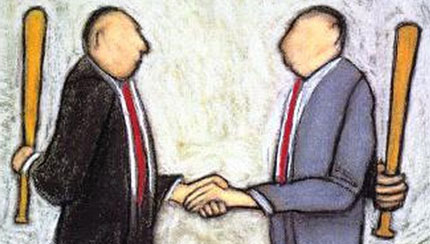 I guess that would be neat, if it were true. But no one is suggesting that Republicans have to preemptively cave in on taxes and only then will we begin discussing spending cuts. It’s a negotiation. President Obama has produced a detailed opening offer that includes about $1.6 trillion in tax increases and $400 billion in spending cuts beyond the $1.5 trillion agreed to last year. Republicans didn’t like it. That’s no surprise. The next step, then, is to hear the Republican counteroffer. So far, though, we’ve heard only crickets.

I’m stumped about what conservatives expect here. Now that Republicans have rejected Obama’s proposal, do they think he should simply come up with another one? And when they say no again, yet another one? Then another. And another. Until, finally, they say yes? That doesn’t even make sense.

If Republicans want to cut structurally reform Medicare and Social Security, they should put a proposal on the table and let CBO score each of its elements. Ditto for the president’s proposal. Then they can start horsetrading. But what kind of trade can Democrats make if they don’t even know what Republicans want?