Whenever you write about a complicated subject, you struggle with how best to explain things. In the end, you always hope you got your point across in a way that sinks in, but you’re never quite sure. And one of the things I’m not sure I explained well in my piece about the link between lead and violent crime is precisely how important the effect of lead on crime is. After all, the causes of crime are varied and complex. Surely lead isn’t the whole answer?

It’s not, and I don’t want anyone to come away from my article thinking that. If we eliminated every microgram of lead from the planet, we’d still have plenty of crime. So here’s a way to think about it. If you take a look at violent crime rates in America, you’d expect to see a sort of baseline level of crime. That level will depend on lots of things: poverty, drugs, guns, race, family structure, etc. But starting in the mid-60s, we saw an enormous rise in crime, well above any sensible sort of baseline. Then, in the 90s, we saw an equally enormous decline. The chart below illustrates this. (The numbers themselves aren’t precise, so don’t take them too seriously. I’m just trying to illustrate a point.) 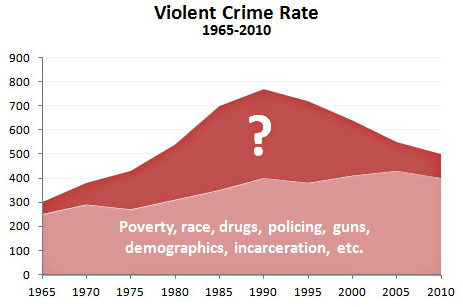 The baseline crime rate is the light red portion at the bottom. It goes up and down a bit over time, but also—and I’m guessing here—shows a steady, modest rise since the 60s. Most likely, the reason for this lies with all the usual suspects.

But then, in dark red, there’s the huge crime wave that lasted nearly 50 years from start to finish. That’s the part the lead hypothesis aims to explain. And the reason we need an explanation is simple: the usual suspects simply don’t seem to do a very good job of accounting for a gigantic, temporary rise and fall in violent crime rates. Within the criminology community, literally no one predicted the huge decline in crime that began in the early 90s. Their focus was on all the usual sociological causes, and they had no reason to think those were going to suddenly improve.

And they were right. For the most part, they didn’t improve. It’s true that the crack epidemic of the 80s burned out, but no one really knows the underlying reason for that. Policing tactics changed in some places, but crime dropped everywhere, so that’s not a very compelling explanation either. Aside from that, poverty didn’t change much, and neither did race or guns or demographics or the number of broken familes or anything else.

The truth is that there’s just not a good conventional explanation for both the huge rise and the huge fall in crime of the past half century. That’s one of the reasons the lead hypothesis deserves such serious consideration. Not only does it fit the data well and make sense based on what we know about the neurological effects of lead. It’s also just about the only good explanation we’ve got. Other factors are still important, and they probably explain rises and falls in the baseline rate of crime. But lead is the best explanation we have for the rest of it.