Over at Politico today, Jim VandeHei and Mike Allen have a long piece about press corps unhappiness with their access to President Obama. Their timing is unfortunate, coming just a day after the press corps embarrassed itself by coming completely unglued over….

….their lack of access to Obama’s golf date this weekend with Tiger Woods. Seriously:

The frustrated Obama press corps neared rebellion this past holiday weekend when reporters and photographers were not even allowed onto the Floridian National Golf Club, where Obama was golfing. That breached the tradition of the pool “holding” in the clubhouse and often covering — and even questioning — the president on the first and last holes.

Yep. They “neared rebellion” not over OLC memos or drone strikes or FOIA tardiness or leak prosecutions, but over their inability to ask Obama questions—tough ones! penetrating ones!—before and after he hit the links. Sheesh.

I wish I knew what to think about this. Does Obama keep a very, very tight rein on press coverage? Yes, he sure seems to. In fact, every president seems to keep a slightly tighter grip on the reins than the previous one. I’m not very happy about that.

At the same time, the reporters interviewed for this piece seem to be weirdly upset over the fact that the Obama White House uses Twitter and Facebook and releases lots of its own photos. But why is this a problem? It’s 2013, guys. Why shouldn’t a president communicate with the public using whatever mediums the public 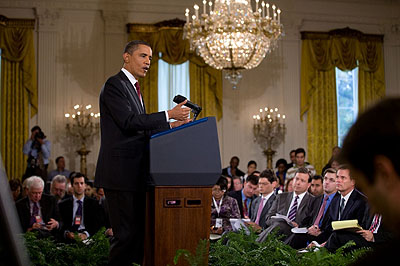 happens to consume? Over the past century, that’s evolved from whistle-stop tours to radio to TV to Facebook, but so what? Why should reporters be unhappy about this?

They also complain that although the president gives lots of interviews (674 in his first term compared with 217 for George Bush), they’re mostly with local outlets, not with the national reporters “who are often most likely to ask tough, unpredictable questions.” I’d have more sympathy for this if national reporters really did ask lots of tough, unpredictable questions, but I’m afraid I’m mostly on Obama’s side on this one:

The president’s staff often finds Washington reporters whiny, needy and too enamored with trivial matters or their own self-importance….Obama and his team, especially newly promoted senior adviser Dan Pfeiffer, often bemoan the media’s endless chase of superficial and distracting storylines.

For evidence of how true this is, check out John Cook’s serial tweeting of every inane question that Mike Allen lobbed at President Bush during a May 2008 interview. Start here and work your way down. It’s not a pretty sight.

What to think? I’d like the president of the United States to make himself more available for tough questioning on a routine basis. However, I’d also like a national press corps that pays enough attention to policy that it can ask tough questions and then keep drilling down when they’re getting brushed off. But most of them don’t. They ask predictable questions based on whatever the opposition party happens to be kvetching about at the moment, and that represents the limit of what they can do. I’m pretty sure you could give Mike Allen a ten-hour interview with the president and he still wouldn’t be able to nail him down on a tough policy question of any importance. He either doesn’t care, doesn’t have the background knowledge to do it, or both.