In the current issue of MoJo, Stephanie Mencimer walks us through the destruction wreaked by Florida governor Rick Scott during his past two years of tea party-inspired budget slashing. At the same time that he cut Florida’s corporate tax rate, Scott has slashed billions of dollars from education, tried to require welfare recipients to submit to drug tests, turned down federal funds for a high-speed rail project, killed a deal to protect the Everglades, and objected to taking money from any federal program even remotely connected to Obamacare. Naturally that also includes programs directly connected to Obamacare:

Of all the big pots of federal money that Florida has rejected, none quite compares with Scott’s moves to block Obamacare’s expansion of Medicaid to the working poor. Today, a single parent with two children can’t qualify for 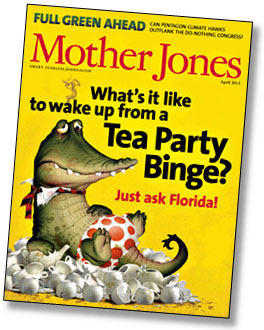 Medicaid in Florida if she makes more than $3,200 a year—one of the nation’s lowest eligibility levels.

….If Florida rejects the Medicaid expansion, state hospitals stand to lose about $654 million a year in federal payments for care to the uninsured—payments that were reduced in Obamacare on the assumption that hospitals would gain revenue by caring for the newly insured. The hospitals, particularly public ones that have already lost $1.5 billion to state budget cuts over the past eight years, have been lobbying hard for the expansion, but tea partiers have been equally vocal, and in June, Scott announced that he would be rejecting the Medicaid expansion. “We don’t need to expand a big-government program to provide for everyone’s needs,” he said. “What we need is to shrink the cost of health care and expand opportunities for people to get a job so more people can afford it.”

All of this has made Scott the least popular governor in the country, and Stephanie reports that because of this, “Scott has softened a bit.” Today brings the surprising news that apparently Scott has softened more than just a bit:

If the Legislature approves, Scott’s announcement means the state will extend eligibility in the federal-state program to single people and families earning up to 138 percent of poverty. The state plans to enroll almost all of them, along with the 3.3 million people currently being served by Medicaid, in private HMOs or other doctor-operated networks.

“While the federal government is committed to paying 100 percent of the cost of new people in Medicaid, I cannot, in good conscience, deny the uninsured access to care,” Scott said at a press conference. He added that the expansion would have to be renewed in three years.

This is only a three-year commitment, and it was conditional on Scott’s plan to privatize Medicaid. But it’s still a surprise for a guy whose approach until now has been modeled after a chain saw. In the end, Florida’s hospital industry apparently had more clout than Florida’s tea partiers.