One of the stories making the rounds this week is a Bloomberg piece about people getting increasingly frustrated with Walmart because the shelves aren’t being stocked and they can’t find the stuff they want. The culprit, apparently, is low staffing levels:

It’s not as though the merchandise isn’t there. It’s piling up in aisles and in the back of stores because Wal-Mart doesn’t have enough bodies to restock the shelves, according to interviews with store workers. In the past five years, the world’s largest retailer added 455 U.S. Wal-Mart stores, [but its workforce] dropped by about 20,000.

….At the Kenosha, Wisconsin, Wal-Mart where Mary Pat Tifft has worked for nearly a quarter-century, merchandise ready for the sales floor remains on pallets and in steel bins lining the floor of the back room — an area so full that “no passable aisles” remain, she said. Meanwhile, the front of the store is 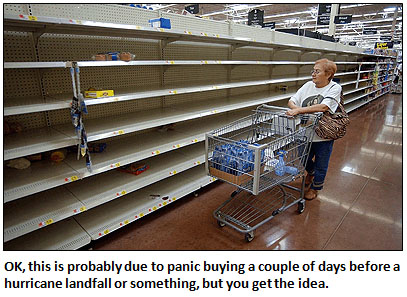 increasingly barren, Tifft said. That landscape has worsened over the past several years as workers who leave aren’t replaced, she said.

Something isn’t right here. I’m no expert in retail logistics, but I do know enough about the laws of physics to understand that this really can’t be true for more than a short period of time. At some point, when the back room gets full, then either (a) new merchandise gets shelved at the same rate it comes in, or (b) it starts overflowing out into the parking lot. Since (b) apparently hasn’t happened, I conclude that the flow of merchandise onto store shelves has to be about the same as the flow of merchandise getting shipped in from Walmart’s warehouses.

So how is that going? One person interviewed for the story said his local Walmart “would go weeks without products he wanted to buy, such as men’s dress shirts, which he found only in very large or small sizes and unpopular colors.” OK, but that’s probably a forecasting/MRP problem, not a shelving problem. Somebody’s not ordering the right stuff for their stores.

Now, if, as reporter Renee Dudley says, Walmart has 13 percent more stores but 1.4 percent fewer workers, that’s going to hurt. Stories of long checkout times or inability to get help in the shoe department make perfect sense. But the shelving thing seems a little iffier. They could certainly be chronically behind, leading to shelves that don’t always have the latest and greatest stuff—and that’s a genuine problem for Walmart execs—but over any period longer than a few days the actual flow of merchandise into the store pretty much has to match the flow of merchandise into the back room. Right?

POSTSCRIPT: And it’s still Walmart, not Wal-Mart. Rebranding is hard!