Why should you care about economic history? Brad DeLong offers a few reasons:

First of all, it makes a very good story….Second, you never know what parts of history may turn out to be useful and very important….Third, you should focus on economic history not just because it is the key axis of the twentieth century in particular 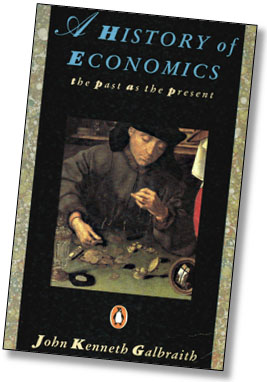 but because economic history is the real history….And, fourth, we do need to search for and keep searching for the “lessons” of the past for the present.

Brad is talking about 20th century history in particular, but taken more broadly I’d offer a fifth reason to be interested in economic history: it’s one of the best ways to understand economics.

This came up in my Reddit AMA a couple of days ago, when someone asked if I could recommend a book that provides a good basic understanding of the modern economy. I didn’t really have a satisfying answer, partly because my background in economics is fairly weak, and partly because it’s accreted over the years from a very wide variety of books, magazine pieces, blog posts, miscellaneous journal articles, and daily news. There’s really not any single book that’s played a key role for me.

But I ended up recommending John Kenneth Galbraith’s A History of Economics anyway. It’s not necessarily the best history of economic thought out there, and in any case it’s a poor recommendation because I think it’s out of print. But it has several virtues to make up for that: it’s brief, engagingly written, wide ranging, and I happen to have read it many years ago and have a dim memory of thinking it was very good.

More generally, if you don’t know much about economics, then reading about the history of economics is one of the best ways to get started. If you try to dive straight into a book about modern economics, even one that’s well written, you’re probably going to have a tough time. But if you come at it chronologically, starting with older, simpler concepts that give way gradually to more modern ideas, the modern ideas will make a lot more sense. You’ll have a context to put them in and a reason to believe that they really are improvements. When you reach the final chapter, modern economics will seem less like a baffling collection of arbitrary rules and more like the final step in a series of steady progressions that were genuinely motivated by new problems that couldn’t be adequately addressed by what came before. At that point, you’ll be able to pick up an introduction to modern economics and probably be able to make sense of it.

Plus, as a bonus, you’ll learn some history! It’s a no-lose proposition.

With that said, I’ll open the floor to other recommendations. Preferably ones that are in print and easily available. What we’re looking for is an engaging, concise, and reliable introductory history of economic thought. Any nominees?

UPDATE: Several commenters have pointed out that Brad is talking about economic history and I’m talking about the history of economics. That’s….absolutely true. And they aren’t the same thing. I wasn’t thinking hard enough about that when Brad’s post struck me as a good springboard to talk about something related.

So: economic history is important! But if you want to learn about economics itself, your best introduction is probably a good history of economics.