I’ve long believed that the core problem with our modern banking system is that it relies on too much leverage. Way too much. Banks with less debt and more capital are far more stable, which means that even if they’re too big to fail, they’re just a lot less likely to fail in the first place.

Basel III has improved capital requirements a bit, raising them from around 8 percent to around 10 percent and stiffening up the kinds of assets that count as capital. In the U.S., Dodd-Frank mandates a blunt 3 percent minimum leverage ratio as a backstop. Those are both good things, but nowhere near enough. I’d like to see risk-based capital requirements on the order of 20 percent and minimum leverage requirements of around 10 percent.

Anat Admati of the Stanford Business School and Martin Hellwig of the Max Planck Institute think even that’s too low, and they make their case in the recently published The Bankers’ New Clothes. I haven’t read it because (a) I’m already convinced, so why bother? and (b) although I hate 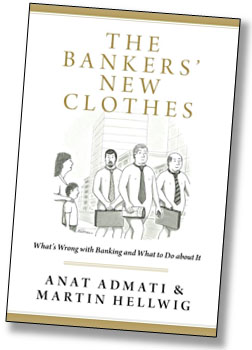 to admit it, I guess I’m a little tired of reading about financial regulation since it’s obvious we’re not going to get any new regs in the near future. Matt Yglesias just finished reading it, though, and although he was skeptical going in, he says the book makes a pretty persuasive case:

Borrowing in order to lend or invest is the core of banking, but while 19th-century banks regularly raised around half of the funds from equity, recently adopted international rules proposing that banks finance no more than 97 percent of their investment with debt are being treated by the industry as the end of the world as they know it….Admati and Hellwig say instead we should make them fund a much larger share of investment—20 to 30 percent—with equity. Speculative losses that would bankrupt a financial institution with 3 percent equity would simply push a bank with 20 to 30 percent equity into the danger zone, where it would be banned from paying dividends or engaging in share buybacks until retained profits have gotten it out of danger.

….The idea that this would be an economy-killer lacks any real basis. The Federal Reserve sets economy-wide interest rates through monetary policy and could offset the overall macroeconomic impact of tighter lending standards. The difference is that some kinds of borrowing—by consumers and small businesses from banks—would get more expensive, while it would get cheaper for large firms and governments to borrow in bond markets. That’s not a free lunch, and in the short-term at least it might make some people pretty unhappy. But it’s not an unattractive vision either. The aughts’ experiment in substituting cheap consumer credit for rising incomes didn’t have a happy outcome, and while nobody likes to stand up for big business, the fact is that large-firm investment activity is an important driver of long-term productivity.

Unfortunately, I don’t see any hope of this happening in the near term. Basel III is going to take years to implement, and neither Democrats nor Republicans in Congress have any appetite for stiffer U.S. requirements. Maybe regulators will finally listen to Admati and Hellwig after the next financial crash.