In the current issue of the Washington Monthly, Haley Sweetland Edwards has a long article about the torturous process of taking the Dodd-Frank financial regulation bill and turning it into the actual detailed regulations that banks have to follow. This sort of thing sounds a lot less interesting than the fight over the bill itself, but in real life it might be more important. Why? Because until the rules are written, laws like Dodd-Frank have no power:

They are, in the words of one CFTC official, “nothing but words on paper” until they’re broken down into effective rules, implemented, and enforced by an agency. Rules are where the rubber of our legislation hits the road of real life. To put that another way, if a rule emerges from a 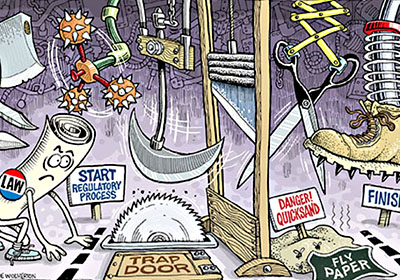 regulatory agency weak or riddled with loopholes, or if it’s killed entirely—like the CFTC’s rule on position limits—it is, in effect, almost as if that part of the law had not passed to begin with.

Edwards outlines why it’s so hard to create effective rules, and as you’d expect, a big part of the reason is that the financial industry is spending billions of dollars gaming the system to slow down, maim, or just outright nullify the intent of the law. They have an army of lobbyists. They meet relentlessly with rulemaking officials. They propose crafty wording changes. They refuse to provide regulators with the data they need. In short, they just plain outgun everyone else, especially since the media’s spotlight turns elsewhere almost immediately after a law is passed.

But there’s more to it than that: Wall Street is also extremely good at using the courts to get their way. One of the first new regulations to be established in the wake of Dodd-Frank was the “proxy access” rule, which makes it easier for shareholders to elect their own candiates to corporate boards. In 2011, the DC Circuit Court struck down the rule, sending shockwaves through the regulatory community:

Almost immediately after the final rule was published, the Business Roundtable and the U.S. Chamber of Commerce sued the SEC on the grounds that the agency’s cost-benefit analysis was inadequate. The judges agreed, marking the first time that the court had overturned a rule explicitly authorized by Dodd-Frank. But that’s not the part that sent shockwaves through the regulatory apparatus. The D.C. Circuit has overturned dozens of regulations over the years, including six SEC rules in the previous seven years, for lots of reasons, including inadequate cost-benefit analyses.

What sent the shockwaves was that this case didn’t seem to have anything to do with cost-benefit analysis at all. In the vitriolic decision, the panel of judges, all of whom were appointed by Republican presidents, lamented that due to “unutterably mindless” reasoning, the SEC had “failed once again” in its cost-benefit analysis. But the court never cited how exactly the agency’s twenty-three-page economic impact report could have done better. It simply appeared to disagree with the agency’s policy choice—and that, apparently, was grounds enough to overturn the rule.

….Questionable judicial behavior aside, the Business Roundtable decision marked “the culmination of a trend empowering regulated entities to strike down regulations almost at will,” wrote Bruce Kraus, a former counsel at the SEC, in a subsequent report. For one, it established an inherent bias—reformers cannot, after all, challenge a rule in court to make it stronger. For another, it opened up the floodgates for future suits. If two of the industry’s most powerful organizations could sue the SEC and overturn a rule on such grounds, it was suddenly feasible for industry groups to sue any agency and overturn any new Dodd-Frank rule using the same arguments.

….The Business Roundtable decision had the immediate effect of adding a whole new lethal section to the regulatory gauntlet, this time complete with flypaper and trapdoors. In the months following, the SEC’s progress through the Dodd-Frank rule making is estimated to have slowed by half as they struggled to “bulletproof” their rules from future lawsuits.

As you may recall, Senate Republicans have steadfastly refused to confirm any of President Obama’s nominees to the DC Circuit. This is why. The DC Circuit is the court that decides the fate of agency regulations, and both Wall Street and the Republican Party are eager to make sure that it remains stacked with right-wing judges who will reliably do their bidding. They know perfectly well that laws like Dodd-Frank are “nothing but words on paper” until a court approves the rules that implement them, and they have no intention of giving up the whip hand they currently hold on this. Welcome to hell.