There have been a spate of headlines recently—and not for the first time—about outbreaks of diseases that are completely resistant to all known antibiotics. The basic reason for this, of course, is that we’ve used antibiotics with abandon ever since they were discovered, and diseases have mutated to resist them. We’re now at the point where there are a few diseases that have mutated enough that pretty much no antibiotic known will kill them.

So why not develop new antibiotics? Partly because there’s not a lot of money in it. But Megan McArdle points us to medicinal chemist Derek Lowe, who points out that although killing bacteria is hard, it’s not that hard. The problem is killing bacteria without killing everything else at the same time. The virtue of penicillin wasn’t that it was the first antibiotic ever discovered, but that it was the first nontoxic antibiotic. Put 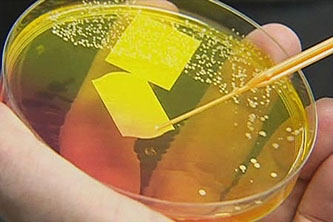 it in a human being, and it killed bacteria without killing the human too. Lowe says that this, more than money, is what makes it so hard to figure out how to kill the new strains of superbugs:

I realised after my first exposure to antibiotic drug discovery that I’d never had any problem generating cytotoxic compounds against mammalian cells. Happened all the time — not that I wanted it to, of course. But killing bacteria, especially fully armed wild-type bacteria? That was a major event. And even then, most of the compounds you find that can accomplish that will do the same thing to your own cells, which is definitely not the idea.

And that brings up another question about those bacterial targets, the ones that are so orthogonal to human cellular pathways. A disturbing number of them have already been the subject of screening efforts and optimisation attempts — without success. They also seem to be a bit orthogonal to the kinds of structures that medicinal chemists make. There are antibiotics with reasonable-looking structures, but they’re outnumbered by natural-product-derived beasts, complex structures no one would have gotten around to synthetically for another few hundred years otherwise. Perhaps these kinds of things are needed to get in through the bacterial membranes, or needed to avoid being pumped right back out, but it does complicate one’s research.

This all means, it’s sad to say, that the limiting factor in antibiotic drug discovery probably isn’t the amount of money to be made at it. That’s too bad. Money’s a factor that could be adjusted by regulatory agencies, governments, and foundations. But no amount of cash will keep resistant bacteria from being the hard targets they are.

More money would probably still help, of course. Too bad about all those sequester cutbacks at NIH, isn’t it? It also might help if we didn’t medicate every farm animal in the world to within an inch of its life. Drug-resistant diseases are going to develop no matter what we do, but they’ll develop faster the more drugs we use. So maybe we should cut back a bit?