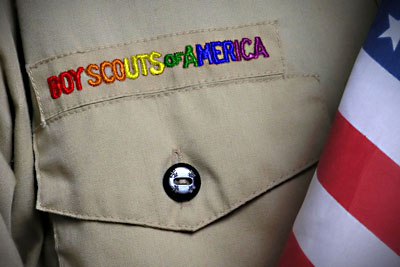 Today’s news from the Boy Scouts:

The Boy Scouts of America called to end a long-standing ban on openly gay members, a spokesman said on Friday, but the organization’s board must still vote in May on whether to ratify the resolution. If the vote is approved, “no youth may be denied membership in the Boy Scouts of America on the basis of sexual orientation or preference alone,” Deron Smith, the organization’s spokesman, told Reuters.

….”This is a historic change for the Boy Scouts,” said Patrick Boyle, whose 1994 book “Scout’s Honor” examined sexual abuse in the Boy Scouts of America. “You have a more than hundred-year-old organization changing what it considered a fundamental belief just a decade ago. That says a lot about the Scouts and a lot about how far the gay rights movement has come in the United States.”

One of the key drivers of the continuing anti-gay policy from the Boy Scouts has been the fact that so many scout troops are sponsored by the Mormon Church. But the longtime Mormon fight against gay marriage, and specifically its support for California’s Proposition 8 in 2008, has been a “PR fiasco” for them. As Stephanie Mencimer reported for us a few days ago, this has led to some changes:

In the five years since the LDS church sent busloads of the faithful to California to canvass neighborhoods, and contributed more than $20 million via its members to support the initiative, it has all but dropped the rope in the public policy tug of war over marriage equality. The change stems from an even more remarkable if somewhat invisible transformation happening within the church, prompted by the ugly fight over Prop. 8 and the ensuing backlash from the flock.

….In response to the anger within Mormon ranks over Prop. 8, the president of the Oakland, California, stake (a stake is akin to a Catholic diocese) began organizing gatherings of gay and straight members to try to bridge the differences. In September 2010, the disgruntled church members received a private audience with one of the church’s top officials, Marlin Jensen, who serves as the LDS’s historian….After listening to them talk, Jensen did something almost unheard of in a church whose strict authoritarian hierarchy is unaccustomed to being challenged from below: He apologized “for the pain that Prop. 8 caused [us],” Mayne recalls, choking up at the memory. It was, he says, a “very meaningful event.”

The apology from a high church official turned out to be just the beginning of a cultural shift toward greater acceptance of gays and lesbians within LDS ranks. In 2011, Mayne was called to serve as an official of his local San Francisco ward, as an openly gay man. It was a historic appointment in an institution with a long history of excommunicating openly gay members, which it referred to as people who were “afflicted” with same-sex attraction.

Officially, the LDS church hasn’t changed its policies, but I imagine that behind the scenes its opposition to gay scouts has been considerably tempered in the past few years. This probably played a significant role in today’s decision.