Matt Yglesias, who’s made of sterner stuff than me, read the cover story of National Review this week. It’s a long, detailed description of a conservative replacement for Obamacare, and it’s the same proposal that “serious” conservatives have been making for years. Here’s the meat of it:

The core of a replacement would be a change in the tax treatment of health insurance. The tax break for coverage would be flattened and capped so that people would not get a bigger break the more comprehensive their insurance. The break would also be extended to people who do not have access to employer coverage….Once a robust market for individually purchased insurance has emerged, the problem of people who are locked out of that market because of preexisting conditions should diminish: People will have both the incentive and the ability to buy cheap, renewable catastrophic policies before getting sick.

What should I say about this? If I don’t take it seriously, then I’m being snide and dismissive even though conservatives have done what I asked for and presented a real alternative to Obamacare. But if I do take it seriously, I’m just 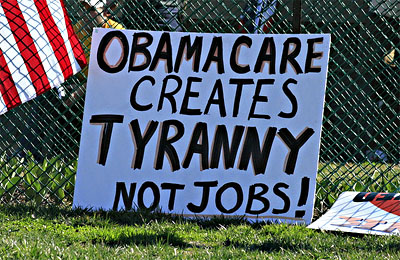 pretending. Because this plan is, and always has been, ridiculous. And conservatives know it.

Catastrophic insurance is already available to individuals, but there’s no robust market for it. Nor will different tax treatment change that: Insurers will continue to discriminate based on health status; they won’t offer renewable policies to everyone; and policies will remain too expensive for low-income workers. Being able to buy them with pretax dollars won’t change that, since most low-income workers don’t pay very much—or any—federal income tax in the first place. A tax credit or a subsidy might help, but then you’re back to Obamacare—except that instead of offering poor people subsidies for actual health care, you’re offering them only the opportunity to make premium payments for a policy that probably won’t do them any good and that they can’t afford. So they won’t buy them.

So why does this proposal have such legs among the right? Partly it’s because it’s something, at least, and it has enough moving parts that you can fool some people into thinking it might work. But it’s also due to the odd conservative obsession with the fact that health insurance, as currently provided, isn’t true insurance. It doesn’t protect you against big but unlikely events, like auto insurance or fire insurance. It simply pays for health care. And that’s true. But who cares? Conservatives need to get beyond that semantic hobbyhorse and instead address the problem that most Americans want addressed: provision of health care. If you don’t want to call it insurance, fine. Just call it health care coverage. And then explain how you’re going to provide that cheaply and efficiently to as many people as possible.

Once you do that, you run into a hard, shiny nugget that you can’t wiggle around: about a third of the country, maybe more, just flatly can’t afford decent health care for their families. No amount of smooth talk about HSAs and tax treatment and catastrophic care will change that. So you can either pay for this coverage via tax dollars or you can let them go without, and chalk it up to nature red in tooth and claw.

Insurance is a red herring. It’s not the primary cause of high health care costs in America, and offering different kinds of insurance, or making it available across state lines, won’t change things by more than a hair. The problem is the actual provision of health care. If you want to do that via a private sector middleman, that’s fine. Unnecessary, but fine. But you still have to pay for the actual health care somehow. When conservatives have a plan for that, let me know.