In 2011, Jon Cohn wrote a story called “The Two Year Window,” about new research demonstrating the importance of the first two years of a child’s life. Roughly speaking, most child care that’s average or better is probably OK. But down in the bottom third, conditions are often bad enough to cause permanent cognitive damage, sometimes at a biological level. One third is a lot of kids.

Appropriately, two years later Cohn is back with a follow-up, “The Hell of American Day Care.” Children who get proper attention and interaction, he says, “tend to develop the skills they need to thrive as adults—like learning how to 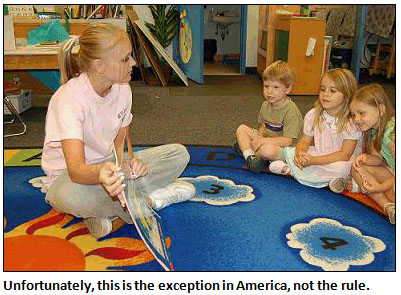 calm down after a setback or how to focus on a problem long enough to solve it”:

Kids who grow up without that kind of attention tend to lack impulse control and have more emotional outbursts. Later on, they are more likely to struggle in school or with the law. They also have more physical health problems. Numerous studies show that all children, especially those from low-income homes, benefit greatly from sound child care. The key ingredients are quite simple—starting with plenty of caregivers, who ideally have some expertise in child development.

By these metrics, American day care performs abysmally. A 2007 survey by the National Institute of Child Health Development deemed the majority of operations to be “fair” or “poor”—only 10 percent provided high-quality care. Experts recommend a ratio of one caregiver for every three infants between six and 18 months, but just one-third of children are in settings that meet that standard.

….At the same time, day care is a bruising financial burden for many families—more expensive than rent in 22 states. In the priciest, Massachusetts, it costs an average family $15,000 a year to place an infant full-time in a licensed center. In California, the cost is equivalent to 40 percent of the median income for a single mother.

I remain convinced that the biggest bang for the buck we could get from any kind of new government spending would involve getting serious about pre-K day care. It wouldn’t be cheap: probably the better part of $100 billion per year. That might take the form of subsidies and regulation, or of government-run day care centers. The latter worked well during World War II, and continue to work well for the military. And it’s a system that serves the French well, with their system of crèches and école maternelles. But it’s not the only way. Tougher regulation of private day care, along with better training and subsidies for poor families, could do the job too:

Since the 1930s, with the introduction of Social Security, the United States has constructed—slowly, haphazardly, often painfully—a welfare state. Pensions, public housing, health care—piece by piece, the government created protections for citizens that the market doesn’t always provide. Child care is the major unfinished part of that project. The lack of quality, affordable day care is arguably the most significant barrier to full equality for women in the workplace. It makes it more likely that children born in poverty will remain there. That’s why other developed countries made child care a collective responsibility long ago.

With universal healthcare finally on the horizon (though progressing with plenty of fits and starts), pre-K is now the last big brick in the social welfare edifice. It’s insane that we deliberately give it such short shrift, even with the knowledge that universal, decent-quality pre-K would almost certainly produce a smarter, more stable, better adjusted generation of adults in the very near future. For more, read the whole story. It’s worth a few minutes of your time.