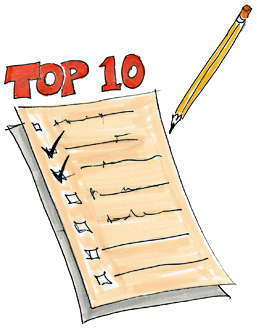 Paul Waldman notes today that on virtually every website, lists are routinely among the most popular pieces:

So what’s the lesson here? Lists are magic. Buzzfeed has built its spectacular success on that principle (just look), there are other web sites who have similar success, (see, for example, Cracked, which on the web is something very different and more successful than its print roots as a Mad magazine rip-off), and it’s something every magazine and website editor knows. The next time you’re at a newsstand, look at the magazine covers, and see how many are using lists to grab your attention. “9 Moves That’ll Drive Him Wild.” “8 Exercises to Burn Fat And Rip Those Abs.” “12 Strategies For Achieving Financial Security.” “14 Celebrity Bikini Nightmares.” But the question is, why?

OK, I’ll take a crack at this. First off, let’s dispose of the old-school list, which is usually a “best of” compilation. Ten Best Movies of the Year. The Hundred Best Albums of All Time. Most Influential Presidents of the United States.

Why do these lists suck us in? Because we like to argue about this stuff. London Calling didn’t make the top ten?!? Clinton ranks higher than Eisenhower? Those idiots! Etc.

Fine. But what about the kinds of lists that have taken over our lives these days, the kind that Waldman mentions above? Those are different. Here’s my guess:

I’m fond of lists myself, because I happen to think they’re (a) often a good way for writers to discipline themselves to deliver the goods without rambling too much, and (b) a good tool that allows readers to follow complex topics. The first piece I wrote for MoJo was “10 Things You Should Know About Cap-And-Trade,” sort of a nerd’s version of the BuzzFeed style of list. Since then, oddly enough, I’ve deliberately avoided writing magazine pieces in that style. I’m not quite sure why. It seemed….immature, maybe? And I suppose it is. And yet, I suspect that for most readers it’s a pretty good organizing tool.

Of course, there are other effective ways to accomplish the same thing. My favorite is the Q&A, which I find a very effective way to organize a complex topic into bite-size chunks. As a writer, it forces you to make sure that the flow of information makes sense, with baseline concepts always getting explained before more complex concepts. As a reader—assuming it’s done well—the Q&A format provides a motivation for why you should read each successive chunk. In a good Q&A, you’re genuinely left with a question in your mind at the end of each answer, and the next one answers it.

I dunno. Maybe I should do another piece in list format for the magazine. Any ideas?