Paul Krugman wonders why the Great Recession hasn’t set off a round of tit-for-tat protectionism:

Why aren’t politicians — even conservative politicians — looking at the situation and saying, hmm, a tariff won’t increase the deficit, it won’t involve debasing the currency, but it could clearly help create jobs?

One answer might be the “Smoot-Hawley caused the Depression” thing; this isn’t true at all, but it might be serving the purpose of a noble lie.

Or maybe it’s the structure of trade agreements. The countries that arguably could really, really use some protection right now are inside the European Union, so no go. Countries outside still know that any protection they impose will lead to big problems at the WTO; the United States has to know that a protectionist response would break 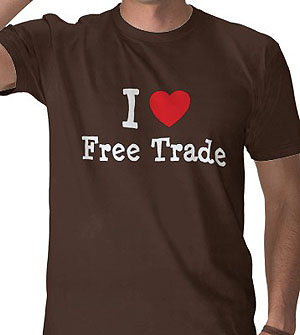 So here’s a thought: maybe the secret of our protectionist non-surge isn’t macroeconomics; it’s institutions.

I agree that institutions play a role here. Inertia is a powerful thing, and there’s not much question that free-ish trade is now a well-established status quo in most of the world.

I don’t think that really explains things, though. If it were truly just institutional inertia at work here, you’d expect to see lots of politicians calling for protectionism but not getting anywhere. The demagogues would do their demogoguing, but fealty to the status quo would be too powerful for them to have any impact.

But that really isn’t what we’ve seen. Generally speaking, we’ve barely seen anyone even advocating protectionist measures. It hasn’t been complete silence, but it’s been pretty close. In the U.S., in particular, the worst you can say is that the forward movement toward signing more trade agreements might have slowed slightly. But enthusiasm for those trade agreements hasn’t really ebbed at all.

No, the answer is simpler: the trade economists have won. They’ve spent decades beating into us that free trade is a net positive for everyone, and by now we’re all convinced. In fact, we’re so convinced that it barely even occurred to anyone to respond to the Great Recession by calling for us to close our borders. In the world of ideas, this has been one of the 20th century’s most complete victories.

I’d also call attention to a point made by Tyler Cowen: over the past two decades, virtually all of the job growth in America has been in the non-tradeable sector. Because of this, the political power of the manufacturing/mining/agriculture industries has been shrinking steadily.

Put these three things together—genuine belief in trade, the declining political influence of the tradeable sector, and the sheer institutional difficulty of limiting trade—and it’s no surprise at all that protectionism has had only a minuscule resurgence over the past few years. It’s a battle that’s largely over and done with.