A new report from the New York Fed describes a disturbing trend: student loan debt has increased so much that it’s crowding out the ability of college graduates to buy homes. As the 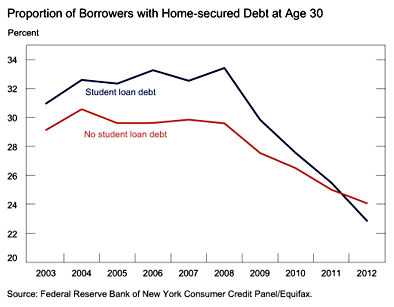 chart on the right shows, young workers with student loan debt—most of whom are college grads—used to take on mortgage debt at a higher rate than the rest of the population. This made sense, since they generally had higher incomes and better career prospects.

But that’s been changing over the past few years. In 2012, for the first time, those without student loan debt actually took out mortgages at a higher rate than those with student loan debt. Annie Lowrey writes about this in the New York Times today:

“It is a new thing, a big social experiment that we’ve accidentally decided to engage in,” said Kevin Carey, the director of the Education Policy Program at the New America Foundation, a research group based in Washington. “Let’s send a whole class of people out into their professional lives with a negative net worth. Not starting at zero, but starting at a minus that is often measured in the tens of thousands of dollars. Those minus signs have psychological impact, I suspect. They might have a dollars-and-cents impact in what you can afford, too.”

Obviously there are other things going on here too. The housing crash may have had more of an impact on college grads, who decided to stay out of the market until it hit bottom. They also might have internalized the lessons of high debt levels better.

But spiraling loan debt probably plays a role too. This is one of those issues that continues to bedevil me, since I think there’s a good case to be made that college is something individuals should pay for. It’s going to reward them with lots of extra income, after all, so why should anyone else help subsidize it?

But as reasonable as that sounds, it’s self-defeating in the end. Yeah, a college education is a boon for the person getting the education. But it’s even more of a boon for society overall to have a big pool of college-educated workers. And it’s a boon to have college-educated workers who don’t spend the first decade of their working lives in a defensive crouch. This is an accidental experiment that’s gone too far. The problem is, I’m not sure what we should do about it. Returning to the era in which state universities provided good quality, low-cost educations would sure be a start, though.