With Oregon in the healthcare news so much lately, it’s only fitting that Portland is holding a vote today on water fluoridation. Sarah Kliff reports:

The fluoride vote will happen Tuesday and the most recent polls have the anti-fluoride camp up 50 percent to 43 percent. If Portland voters reject fluoridated water, it will follow in the path of many cities before it. Forty-four cities around the world — largely in the United States, Australia and Canada — have passed anti-fluoridation policies this year, according to the Fluoride Action Network.

No, it’s just because I have a bit of sympathy for the slippery slope argument. This argument is simple: The goal of a water agency should be to provide clean water, period. So chlorine is fine because that’s part of the core mission of making sure water is clean. But once you decide you can add other stuff because it provides 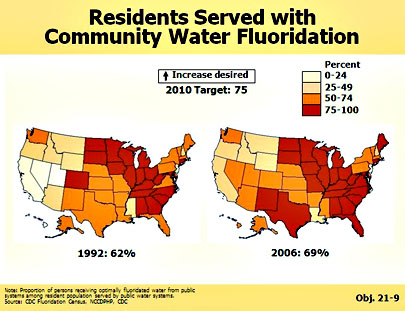 some kind of societal benefit, where does it stop? If you can add fluoride, why not statins? Or anything else that a majority of the population thinks is a good idea?

Now, that said, I’ve never had more than a bit of sympathy for slippery slope arguments of any kind. The key question is whether or not we’re actually likely to fall down the slope. We’re human beings with intelligence and agency, after all, not rocks on a hillside. I believe, for example, that human beings are naturally cruel to outsiders, especially during war, so we need the strongest possible taboos against torture and ill treatment of prisoners. Even the smallest crack is likely to open the floodgates of rage and revenge. But fluoridation isn’t like that. Are people really likely to start filling up their municipal water supplies with anything that sounds good once they’ve taken the fatal first step with fluoride? I don’t think so, and history suggests I’m right not to worry too much about that. So fluoridation is fine.

Still, I sort of get the fear. And for those of you who think the fear is just some right-wing rube thing, take a look at the map on the right. The areas of the country with the highest fluoridation rates? The South and the Midwest. The areas with the lowest rates? The Northeast and the Pacific Coast.