Pass the popcorn! Today the Heritage Foundation, under the leadership of conservative dreamboat (and former senator) Jim DeMint, released a study showing that immigration reform would cost taxpayers a gazillion dollars over the next 50 years. The actual number doesn’t matter much, just the fact that it has a nice, shocking number of zeroes in it. The methodology of the report doesn’t matter much either. You’ll be unsurprised to learn that it’s shoddy, but this isn’t a PhD dissertation. It’s not meant to be accurate, it’s meant to provide cover for any member of Congress who wants to give a speech and have a few handy numbers to quote. (You can read all the gory details of the study’s shoddiness here if you’re feeling especially masochistic today.)

So far, so boring. But here’s what’s really great about this: Heritage is getting raked over the coals today by fellow conservatives for issuing this shoddy study. Why? Not because they happen to disagree about immigration reform, but because Heritage was able to produce its gigantic number only by abandoning the sacred conservative cause of dynamic scoring.

Dynamic scoring is critical to the conservative movement because it’s the way they can claim that tax cuts produce higher tax revenue. The basic idea is that you can’t just look at, say, a 10 percent tax cut and assume that it will reduce tax revenue by 10 percent. That’s fusty 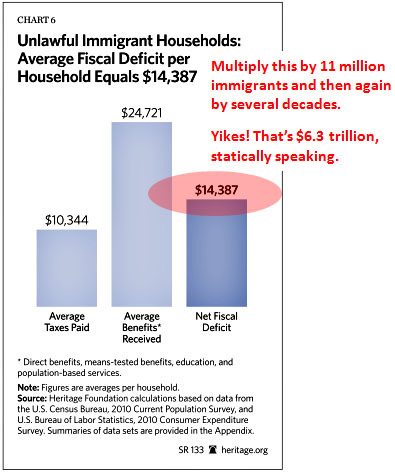 old static scoring. Instead you have to take account of the fact that the tax cut will supercharge the economy, which in turn will produce higher incomes and higher tax receipts even though tax rates are lower. The Heritage immigration report, however, doesn’t take into account the fact that undocumented immigrants are all dynamically creating extra wealth and increasing the size of the economy. Jennifer Rubin reports:

Josh Culling of ATR said that while Heritage was a “treasured ally,” its work was a rehash of a flawed 2007 study….Cato’s Alex Nowrasteh was even more outspoken saying “how disappointed” he was that Heritage abandoned conservative dynamic scoring….The prize for candor, though, went to American Action Forum’s Douglas Holtz-Eakin, who stated flatly, “It really misleads.”

….These are longtime allies of Heritage and promoters of free market capitalism who are witnessing the intellectual bastardization of a once great institution….Fiscal, pro-growth conservatives are concerned (as they should be) that the movement may turn reactionary, rejecting not just dynamic scoring but faith in a dynamic economy and society.

….However the debate turns out, one hopes that real scholars at Heritage and its supporters reject the slovenly work in the Heritage report and reaffirm the conservative message that more workers create more wealth, higher incomes and upward mobility. For if they do not, then virtually all their criticism of the Obama administration has been wrong and free markets (for labor and goods) are a cruel farce.

Will the “real scholars” at Heritage speak up? Will Heritage manage to reverse its growing intellectual bastardization? Or will the rest of the conservative movement eventually have to acknowledge that Heritage has always been willing to use whatever methodology happens to produce the results it wants? Stay tuned.1

1Just kidding. Here are the answers: (a) No. (b) No. (c) No. And as long as I have a footnote handy, it’s worth saying that nearly everyone agrees that dynamic scoring is reasonable in small doses. Heritage, however, has always been a champion of truly gargantuan claims for the potency of dynamic scoring. This is what makes their U-turn today so notable.