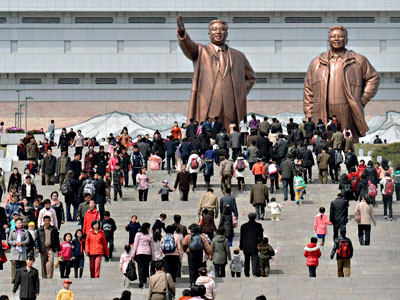 Four years ago, Fox News reporter James Rosen wrote a story saying the CIA had learned that North Korea planned to carry out a nuclear test if the UN approved additional sanctions:

What’s more, Pyongyang’s next nuclear detonation is but one of four planned actions the Central Intelligence Agency has learned, through sources inside North Korea, that the regime of Kim Jong-Il intends to take — but not announce — once the Security Council resolution is officially passed, likely on Friday. The other three actions include the reprocessing of all of the North’s spent plutonium fuel rods into weapons-grade plutonium; a major escalation in the North’s uranium-enrichment program; and the launching of another Taepodong-2 intercontinental ballistic missile.

The Justice Department immediately launched a leak investigation, which culminated in charges against Rosen’s source, Stephen Jin-Woo Kim, an analyst at the Lawrence Livermore National Laboratory who had been detailed to the State Department. As part of this investigation, DOJ tracked Rosen’s movements and subpoenaed his phone records. Journalists are apoplectic about this, but Jack Shafer wonders just what Rosen thought he was doing:

Although Rosen’s story asserts that it is “withholding some details about the sources and methods … to avoid compromising sensitive overseas operations,” the basic detail that the CIA has “sources inside North Korea” privy to its future plans is very compromising stuff all by itself. As Rosen continues, “U.S. spymasters regard as one of the world’s most difficult to penetrate.”

Hmmm. There’s really no other way to get information this detailed except from a source inside North Korea, so it’s not clear to me that Rosen really gave anything away with that line. At the same time, it’s not clear why Rosen published this story at all. As Michael Tomasky says:

No offense intended to Rosen, but…I don’t even see where that’s such big news. Of course North Korea was going to do something to protest a UN sanctions vote. Do what? Well, missile tests is what it’s been doing for the last several years now to scare people, so…a missile test. I mean, if I’d read that on June 11, 2009, I’d have stopped after three paragraphs and thought tell me something I don’t know. So why was the government so up in arms about it in the first place?

Tomasky’s point is that it’s outrageous that DOJ would go ballistic over a story that basically revealed nothing. But that misses the point. The story is completely uninteresting. And yet, by its very publication, it alerted North Korea to a possible mole in high places. So why would you run a piece like this? Here’s Josh Marshall:

It’s difficult for me not to be more shocked by the self-interested preening of fellow journalists over a comically inept reporter and source than the arguable dangers this episode holds for press freedoms. Indeed, I’ve tried and failed. I can’t.

I don’t like the fact that the Obama administration has been so aggressive at investigating leaks, and so aggressive at targeting reporters when they do. But it’s stuff like this that prevents the American public from sympathizing much. When they look at a case like this, most of them don’t see the government eroding a reporter’s First Amendment rights. They see a reporter recklessly divulging legitimately sensitive information and destroying a career in the process —and apparently doing it just for the hell of it.

I still don’t condone the DOJ actions in this case—especially since they basically had Kim’s confession and didn’t really need Rosen’s phone records—but at the same time I’d sure be interested in hearing Rosen’s defense. What was he thinking when he did this?