Ashok Rao has a response to my robot article that, unfortunately, I don’t entirely understand. But there are bits and pieces I’d like to respond to, so let’s get to it. First off, the main point of my piece is that even if a robot paradise 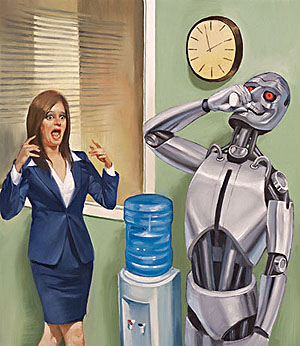 What Drum ignores is, the Great Redistribution has already started. Our tax code was designed for a bygone era and, therefore, obscures the immense change technology has created in the past ten years. Redistribution in the form of pure consumer surplus. The web application system allows us, for the first time, to quench our materialistic desires for free.

Well, I sure hope I didn’t ignore this. I didn’t mean to. In fact, I devoted a considerable part of my piece to exactly this, though from the flip side of the coin. The economic effects of smart machines, I argued, started around 2000, and we’ve been seeing the disemployment effects ever since. The impact so far has been tiny, but real.

Now, Rao usefully points out the mirror image of my point, namely that the rise of automation has positive consumer effects too. However, I think we’d be well advised to take a closer look at just who benefits from this. The problem is that disemployment hits a certain class of people, while the consumer surplus generated by the web economy primarily benefits a different class. Nor is the web economy free. It’s cheap, certainly, but not free. Nor is it enough. Even if we can immerse ourselves in the web all we want for low cost, we still need to eat, clothe ourselves, live somewhere, and so forth. Until our future robot paradise arrives, this is a big deal. If you lose your job to a robot, your net economic position is going to be sharply worse than it used to be.

The last few paragraphs of Rao’s essay sound interesting, and I’d like to engage with them, but unfortunately I didn’t understand what he was getting at. It’s unclear how much of it is being attributed to me and how much is stuff he himself believes. However, this part is clear enough:

But there is no “dimly lit tunnel”. There will be manual jobs: until there aren’t. The future will be a cornucopia of thought, refinement, ideology, and science. For the first time, millions can enter the “thinking classes”, no longer tethered to labor as a need of production. No longer tethered to the capitalist machinery that hitherto made us rich. Thusly, we won’t be living in Fukuyama’s nostalgic sense of an ahistoric world, either. Rather, the rich social and intellectual interactions unlocked will generate the most amazing cascades of culture at a sophistication never-before-seen.

I very much doubt this. The vast majority of humans have neither the skills nor the desire for this. Rao may be right about “millions,” but that represents just a tiny fraction of the human race. What about the rest of us?