Here’s my favorite part of the IRS scandal yet. According to the Inspector General’s report, the Cincinnati office of the IRS developed an acronym for “Be On the Look Out.” Yep, they turned it into BOLO. Apparently the spreadsheet which listed words and phrases that might indicate political activity became known as the “BOLO Listing.” I expect this to take Twitter by storm any second now.

UPDATE: Pardon my ignorance. Turns out this is a standard police term. A “BOLO alert” is issued when police are trying to find someone suspected of a crime. I guess the IRS appropriated the term, they didn’t invent it. 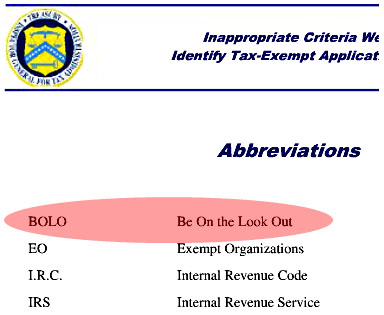